The move instructions copy a sequence of bits into a register. This bit sequence can come either from another register or from a compile-time constant.

The MOV instruction has several variants, as shown in the following table:

All these move instructions have the following in common:

If you need to move more than one value, see the other instructions below. Floating point conversions are beyond the scope of this guide.

For example, consider the following instruction:

There are several reverse instructions to handle different sizes of containers and subcontainers, as shown in the following tables and diagrams:

The extract instruction, EXT, creates a new vector by extracting consecutive lanes from two different source vectors. An index number, n, specifies the lowest lane from the first source vector to include in the destination vector. This instruction lets you create a new vector that contains elements that straddle a pair of existing vectors.

The EXT instruction constructs the new vector by doing the following:

For example, the following instruction uses an index with value 3:

This instruction extracts lanes as follows:

The other extraction instructions are less general. They copy all the values from a source register, then place them into smaller lanes in the destination, as follows:

TRN1 interleaves the odd-numbered lanes from the two source vectors, while TRN2 extracts the even-numbered lanes. The following diagram shows this process:

We can use the Neon transpose instructions to transpose matrices.

We can store these matrices across two Neon registers, with the top row in V0 and the bottom row in V1, as shown in the following diagram:

The following instructions transpose this matrix into the destination registers V2 and V3:

The following diagram illustrates this process: 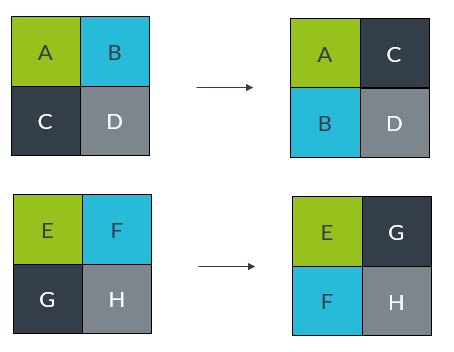 For example, the following instructions create an interleaved vector that is stored across two registers, V1 and V2:

All the permute instructions that we have described have one thing in common: the pattern of the permutation is fixed. To perform arbitrary permutations, Neon provides the table lookup instructions TBL and TBX.

For example, the following instruction provides a vector of lookup values in V0, and a lookup table consisting of two registers: V1 and V2:

The value in lane 0 of V0 is 6, so the value from lane 6 of V1 is copied into the first lane of the destination register V4. The process continues for all the other lookup values in V0, as shown in the following diagram:

The TBL and TBX instructions only differ in how they handle out of range indices. TBL writes a zero if an index is out-of-range, while TBX leaves the original value unchanged in the destination register. In the above example, lane 14 in V0 contains the lookup value, 40. Because the lookup table only contains two registers, the range of indices is 0-31. Lane 14 in the destination vector is therefore set to zero.

The TBL and TBX instructions are very powerful, so only use these instructions when necessary. On most systems a short sequence of fixed pattern permutations is faster.