The following diagram shows a simplified version of the software stack and Exception level that we looked at in the section on virtualizing exceptions: 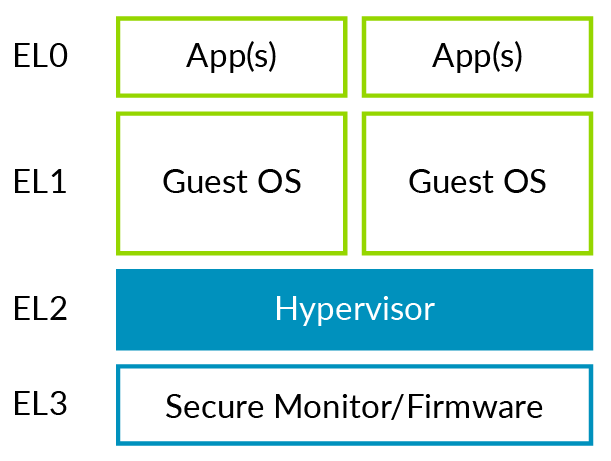 You can see how a standalone hypervisor maps to the Arm Exception levels.  The hypervisor is running at EL2 and the virtual machines (VMs) at EL0/1. This situation is more problematic for hosted hypervisors, as shown in the following diagram: 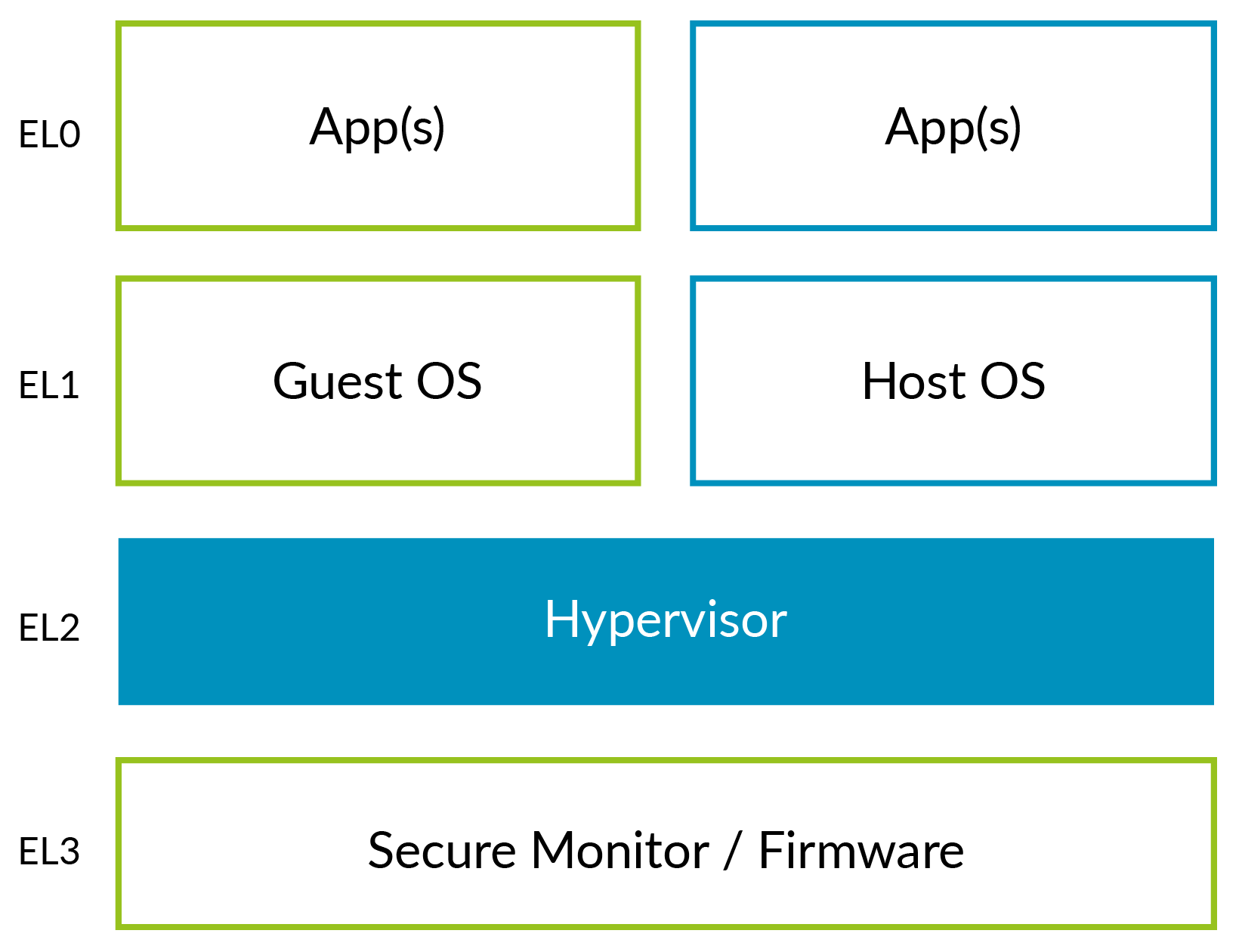 The kernel will need to handle some differences between running at EL1 and EL2, but these are restricted to a small number of subsystems, for example early boot.

Running the Host OS at EL2

VHE is controlled by two bits in HCR_EL2.  These bits can be summarized as:

* On an exception that exits from a VM into the hypervisor, TGE would initially be 0. Software would have to set the bit before running the main part of the host kernel.

You can see these typical settings in the following diagram: 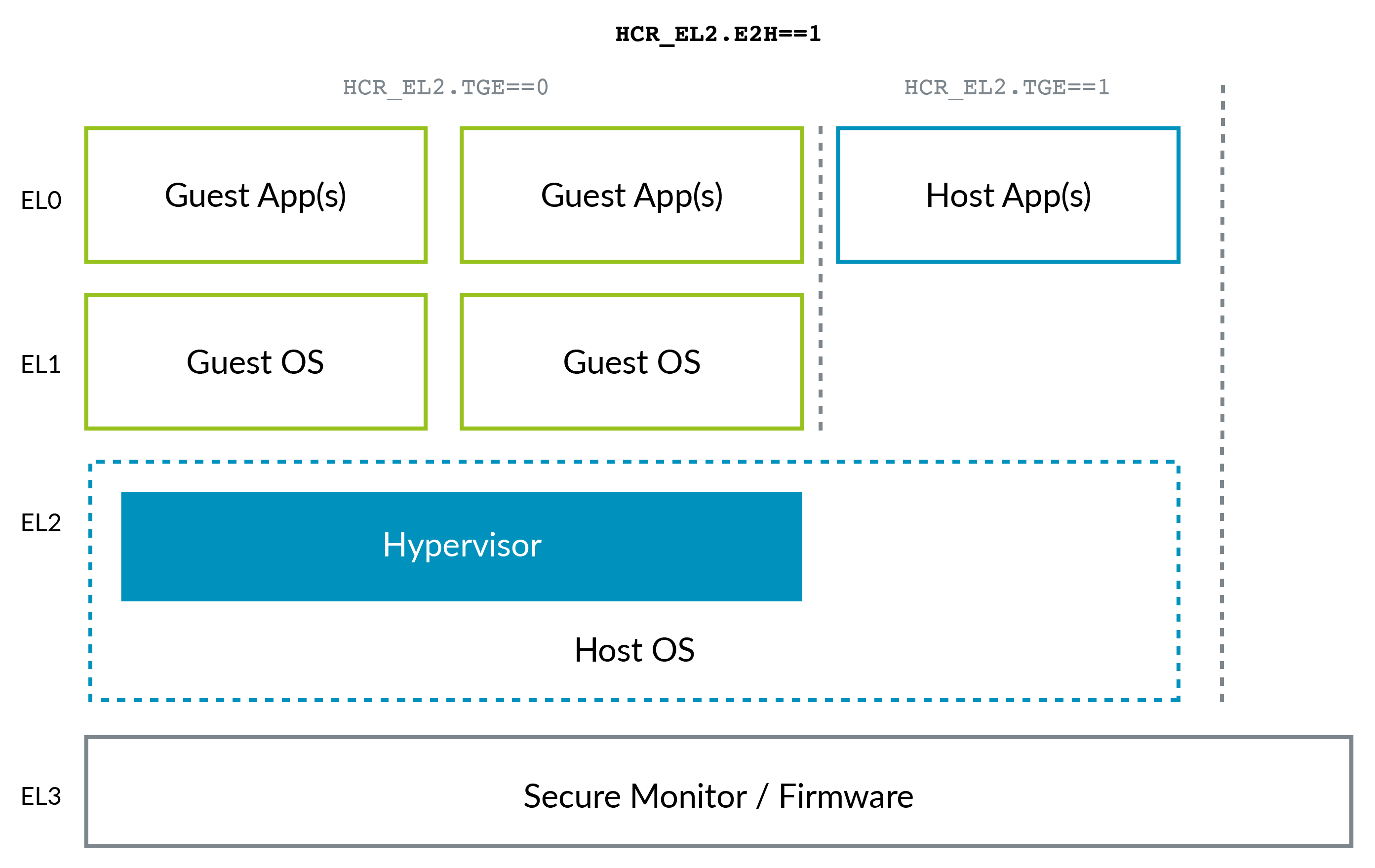 The following diagram shows what the virtual address spaces of EL0/EL1 looked like before VHE was introduced:

As discussed in Memory Management, EL0/1 has two regions.  By convention, the upper region is referred to as kernel space, and the lower region is referred to as user space.  However, EL2 only has a single region at the bottom of the address range.  This difference is because, traditionally, a hypervisor would not host applications. This means that the hypervisor does not need a split between kernel space and user space.

Note: The allocation of kernel space to the upper region, and user space to the lower region, is simply a convention.  It is not mandated by the Arm architecture.

The EL0/1 virtual address space also supports Address Space Identifiers (ASID), but EL2 does not. This is because the hypervisor would not usually host applications.

To allow our Host OS to execute efficiently in EL2, we need to add the second region and ASID support. Setting HCR_EL2.E2H addresses these issues, as you can see in the following diagram: 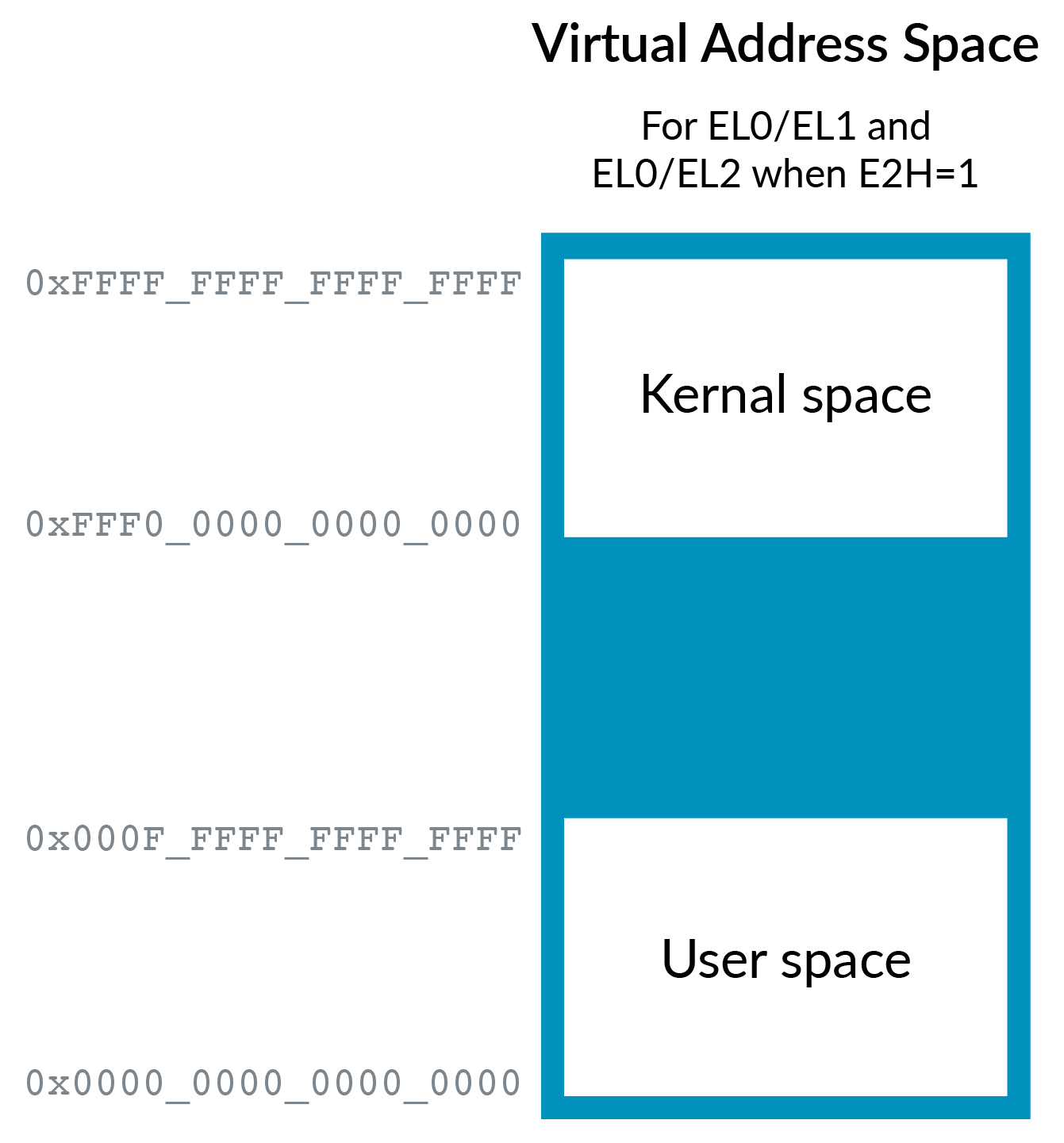 While in EL0, HCR_EL2.TGE controls which virtual address space is used: either the EL1 space or the EL2 space.  Which space is used depends on whether the application is running under the Host OS (TGE==1) or the Guest OS (TGE==0).

We saw in the section on Virtualizing generic timers that enabling VHE changes the layout of the EL2 virtual address space. However, we still have a problem with the configuration of the MMU.  This is because our kernel will try to access _EL1 registers, such as TTBR0_EL1, rather than _EL2 registers such as TTBR0_EL2.

To run the same binary at EL2, we need to redirect the accesses from the EL1 registers to the EL2 equivalents. Setting E2H will do this, so that accesses to _EL1 system registers are redirected to their EL2 equivalents.  This redirection illustrated in the following diagram:

However, this redirection leaves us with a new problem. A hypervisor still needs access to the real _EL1 registers, so that it can implement task switching.  To resolve this, a new set of register aliases are introduced with an _EL12 or _EL02 suffix.  When used at EL2, with E2H==1, these give access to the EL1 register for context switching. You can see this in the following diagram: