What is stage 2 translation?

Note: For an introduction to how address translation works, see our guide on Memory Management.

The format of the translation tables used for stage 2 is very similar to that used for stage 1. However, some of the attributes are handled differently in stage 2 and the Type, Normal or Device, is encoded directly into table entry rather than via a MAIR_ELx register.

Each VM is assigned a virtual machine identifier (VMID). The VMID is used to tag translation lookaside buffer (TLB) entries, to identify which VM each entry belongs to.  This tagging allows translations for multiple different VMs to be present in the TLBs at the same time.

The VMID is stored in VTTBR_EL2 can either be 8 or 16 bits. The VMID is controlled by the VTCR_EL2.VS bit. Support for 16-bit VMIDs is optional, and was added in Armv8.1-A.

Note: Translations for the EL2 and EL3 translation regimes are not tagged with a VMID, because they are not subject to stage 2 translation.

Each VM has its own ASID namespace. For example, two VMs might both use ASID 5, but they use them for different things. The combination of ASID and VMID is the thing that is important.

The stage 1 and stage 2 mappings both include attributes, such as type and access permissions. The Memory Management Unit (MMU) combines the attributes from the two stages to give a final effective value. The MMU does this by selecting the stage that is more restrictive, as you can see here:

In this example, the Device type is more restrictive than the Normal type.  Therefore, the resulting type is Device. The result would be the same if we reversed the example, so that stage 1 = Normal, and stage 2 = Device.

This method of combining attributes works for most use cases, but sometimes the hypervisor might want to override this behavior. For example, during early boot of a VM.  For these cases, there are some control bits that override the normal behavior:

Like the physical address space on a physical machine, the IPA space in a VM contains regions that are used to access both memory and peripherals, as shown here: 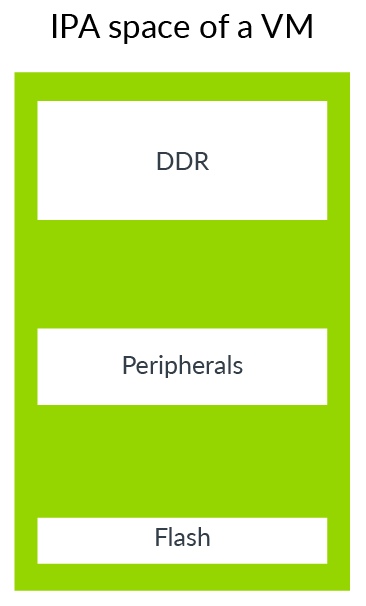 Virtual peripherals are completely emulated in software by the hypervisor, as this diagram highlights:

An assigned peripheral is a real physical device that has been allocated to the VM, and mapped into its IPA space. This allows software that is running within the VM to interact with the peripheral directly.

A virtual peripheral is one that the hypervisor is going to emulate in software.  The corresponding stage 2 table entries would be marked as fault. Software in the VM thinks that it can talk directly to the peripheral, but each access triggers a stage 2 fault, with the hypervisor emulating the peripheral access in the exception handler.

Starting with the address, Exception Model introduces the FAR_ELx registers.  When dealing with stage 1 faults, these registers report the virtual address that triggered the exception.  A virtual address is not helpful to a hypervisor, because the hypervisor would not usually know how the Guest OS has configured its virtual address space.  For stage 2 faults, there is an additional register, HPFAR_EL2, which reports the IPA of the address that aborted.  Because the IPA space is controlled by the hypervisor, it can use this information to determine the register that it needs to emulate.

Exception Model shows how the ESR_ELx registers report information about the exception.  For single general-purpose register loads or stores that trigger a stage 2 fault, additional syndrome information is provided.  This information includes the size of the accesses and the source or destination register, and allows a hypervisor to determine the type of access that is being made to the virtual peripheral.

This diagram illustrates the process of trapping then emulating the access: 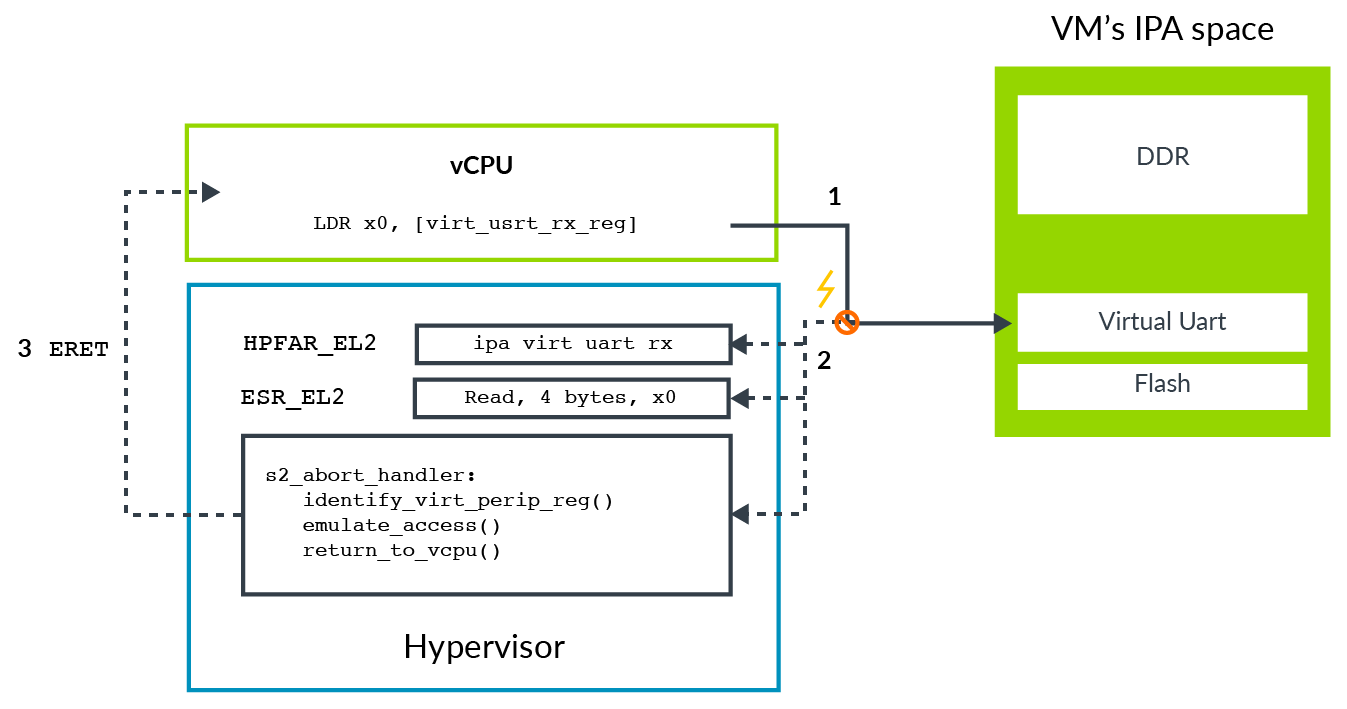 This process is described in these steps:

So far, we have considered different types of access that come from the processor. Other masters in a system, such DMA controllers, might be allocated for use by a VM. We need some way to extend the stage 2 protections to those masters as well.

Consider a system with a DMA controller that does not use virtualization, as shown in the following diagram: The DMA controller would be programmed via a driver, typically in kernel space.  That kernel space driver can ensure that the OS level memory protections are not breached.  This means that one application cannot use the DMA to get access to memory that it should not be able to see.

Let's consider the same system, but with the OS running within a VM, as shown in the following diagram: 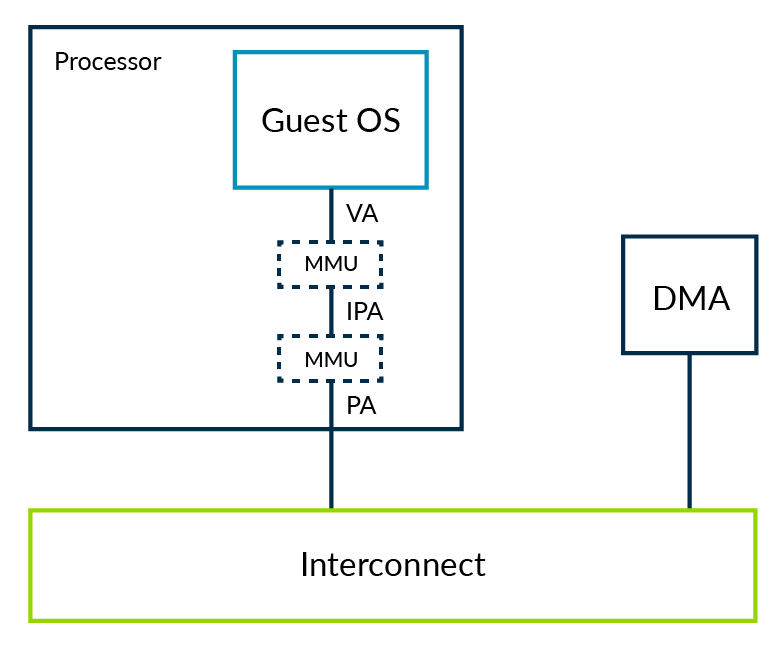 In this system, a hypervisor is using stage 2 to provide isolation between VMs. The ability of software to see memory is limited by the stage 2 tables that the hypervisor controls.

Allowing a driver in the VM to directly interact with the DMA controller creates two problems:

An alternative to trapping and emulating driver accesses is to extend the stage 2 regime to also cover other masters, such as our DMA controller. When this happens, those masters also need an MMU. This is referred to as a System Memory Management Unit (SMMU, sometimes also called IOMMU): 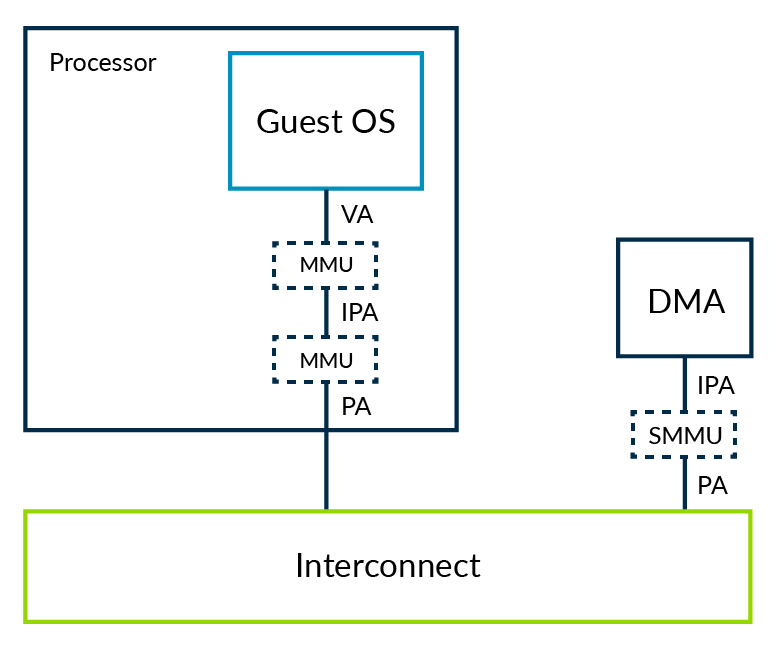 The hypervisor would be responsible for programming the SMMU, so that the upstream master, which is the DMA in our example, sees the same view of memory as the VM to which it is assigned.

This process solves both of the problems that we identified. The SMMU can enforce the isolation between VMs, ensuring that external masters cannot be used to breach the sandbox. The SMMU also gives a consistent view of memory to software in the VM and the external masters allocated to the VM.

Virtualization is not the only use case for SMMUs. There are many other cases that are not covered within the scope of this guide.