This guide describes concepts that are useful to know before debugging an Armv8-A processor. To illustrate these concepts, we mention debuggers, for example GBD and the Arm Debugger, which is part of Arm Development Studio.

At the end of this guide, you should be able to:

This guide assumes a familiarity with the following guides:

We will describe external and self-hosted debug, and invasive versus non-invasive debug. We are providing an overview only, and do not provide detail about how to program an Armv8-A processor to use any particular type of debug.

External debug is usually used when doing chip validation and bring-up, or when working with bare-metal environments. Generally, external debug relies on a physical connector, for example JTAG, or Serial Wire Debug (SWD) on the target being debugged. 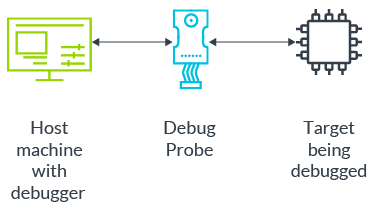 Self-hosted debug occurs when the debugger and the software being debugged run on the same processor. A good example is gdbserver, which is used for Linux application debug. Gdbserver is a program that runs alongside a Linux application, and allows a debug environment like GDB or the Arm Debugger to debug the application.

This diagram shows how gdbserver interacts with an Operating System (OS) application and a debugger: 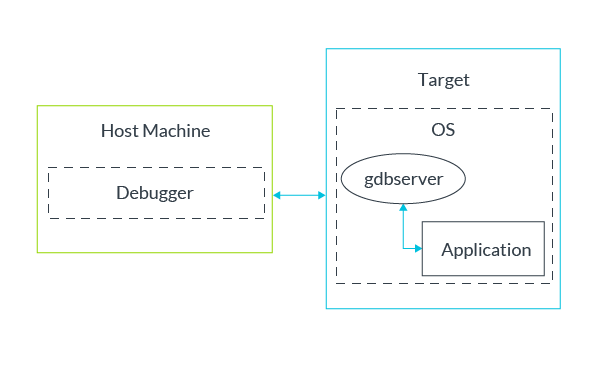 Even though the debugger attached to gdbserver usually runs off-target, gdbserver is still classed as self-hosted debug.

Self-hosted debug is usually used with debugging applications that are running under an OS, or when physical debug connectors are not available.

Some familiar debug methods are invasive debug methods. These include stepping through code, viewing memory, setting breakpoints and watchpoints, and viewing registers.

When debugging, it is important to consider the capabilities and relevancy of the target. Sometimes a target, during the development cycle, bears only a cursory resemblance to the final SoC design. This means that areas like speed, functionality, or performance might differ between earlier targets and the final design.

Here is a list of different targets that you might work with during a project, and some things to remember about each of them:

Before debugging, another thing to consider is the type of program that is being debugged. The image being debugged determines the level of complexity for both the debug operations and the information that you obtain from a debugger.

Here is a list of different types of programs that you might work with, and some things to remember about each of them:

On connection to a target, the debugger shows the current state of the processor. Because of the way that the architecture is configured, the processor is probably just coming out of reset in Secure EL3 when you halt the debugger. However, your SoC might not do this.

We will now describe some common states that the target might be in upon connection:

Core or processor is powered down

Some targets contain hardware elements (for example switches), firmware, boot code, or an OS that power down certain cores or processors unless steps are taken. Also, cores or processors that are not being used for execution, or that have not been used recently, may be powered down by the power controller or OS of the SoC.

Some debuggers cannot connect to powered down logic. If a debugger connection is successful, you probably cannot do much with the debugger until the core, processor, or debug probe is powered up.

Core or processor is held in reset

Some debuggers cannot connect to cores or processors that are held in reset. If a connection is successful, debug probe cannot be performed until the core or processor is released from reset.

Core or processor is in a different security state

This diagram shows hardware or software locking a user out of the Secure state: 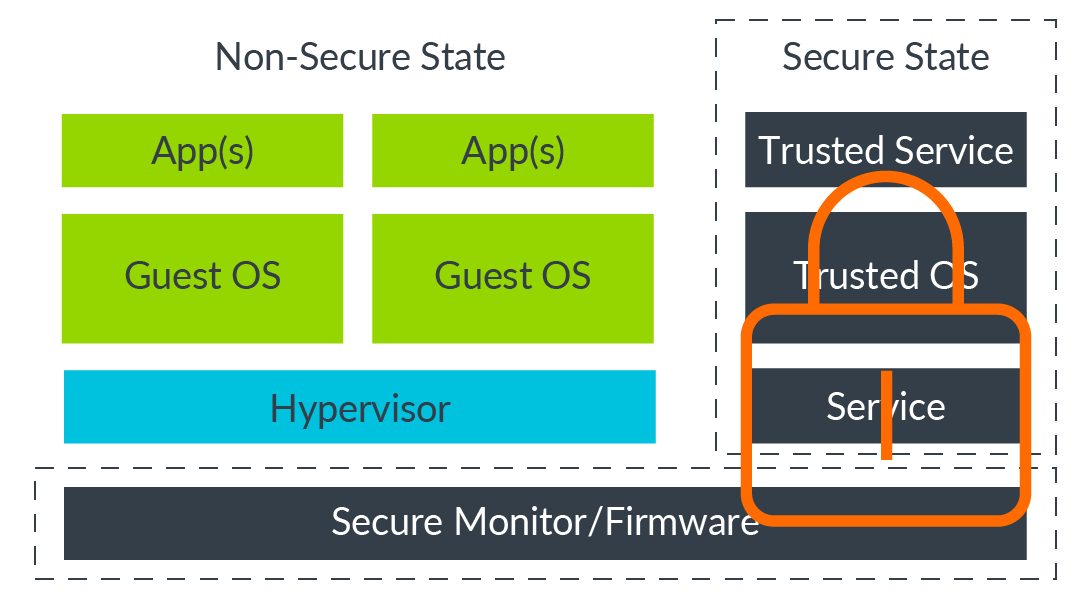 If you try to connect a debugger to an SoC that uses this operational model, then the debugger will only allow you to connect to the Non-secure state.

Core or processor is in a different Exception level

There are two common reasons why EL3 is not entered when connecting a debugger to a target.

The first reason is that the Exception level is not implemented.

In the Armv8-A architecture, certain Exception levels are optional. In some Armv8-A processor or core implementations, an Exception level is not accessible because it is not present in the design.

This diagram shows a design in which EL3 and EL2 are not implemented:

If you connected a debugger to an SoC that uses this operational model, you can only debug Exception levels EL1 and EL0.

The second reason why EL3 is not entered when connecting a debugger to a target is that the hardware or software locks users out of an Exception level.

SoC designs can lock users out of certain Exception levels either through hardware or software. This locking usually occurs late in the development cycle of the SoC, so that unprivileged users cannot access aspects of the code or SoC design.

This diagram shows an SoC in which EL3, which is usually where the secure monitor and firmware reside, is locked: 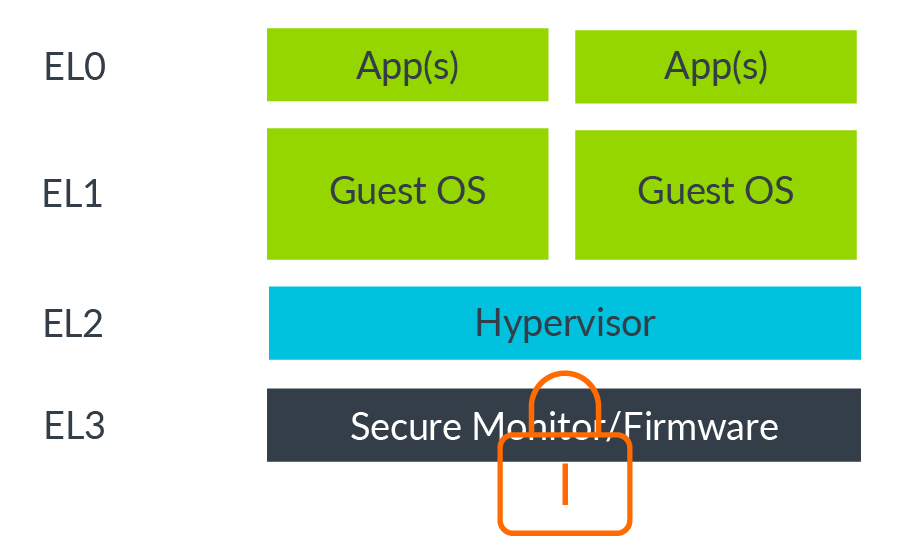 If you connected a debugger to an SoC that uses this operational model, then you could debug EL2, EL1 and EL0, but not EL3.

Here are some of the more common target initialization steps:

Powering up or taking a core or processor out of reset

As explained in Target state, there are various reason why a core or processor might be powered down or held in reset.

Here are some common steps that you can follow to put the core or processor into a better state for debug:

Some SoC designers add locking devices or manipulate the debug hardware, so that users without certain information cannot access the debug probe on the target. These locking techniques prevent unprivileged users from debugging the SoC. These techniques are usually implemented late in the SoC development cycle. It is possible that earlier revisions of a target do not require unlocking, but later revisions do.

Here are some common steps that you can use to unlock the debug logic:

Pin space on an SoC is usually limited. This means that less frequently used devices might have their signals multiplexed with other devices on the SoC. For example, the signals of the off-chip trace port, the Trace Port Interface Unit (TPIU), might be multiplexed with the General Purpose I/O (GPIO) signals.

Here are two common steps that you can follow to demultiplex signals:

Because pin space on an SoC is generally limited, debug output lines on an SoC might be available, but the physical connector is not. If there is pinout space on the PCB, you can overcome this issue by soldering a connector to the board.

In the late stages of the development cycle, the debug socket for an SoC might not be physically available. This might be because the SoC designer does not want users to be able to debug the target, or, or because debug is available through a non-physical method, for example gdbserver. If no socket is available, consult the user manual for the target, or other resources, for example tutorials or community postings.

Ask development questions, and find articles and blogs on specific topics from Arm experts at the Arm community.

This guide described concepts that are useful to know before debugging an Armv8-A processor, and explained different types of debugs, target and application considerations, target state, and target initialization.

This guide is the first of two debugging guides for Armv8-A. To learn more, read the Debugger usage on Armv8-A guide.