Before we explain the details of the Armv8-A exception model, let's start by introducing the concept of privilege. Modern software expects to be split into different modules, each with a different level of access to system and processor resources. An example of this is the split between the operating system kernel, which has a high level of access to system resources, and user applications, which have a more limited ability to configure the system. 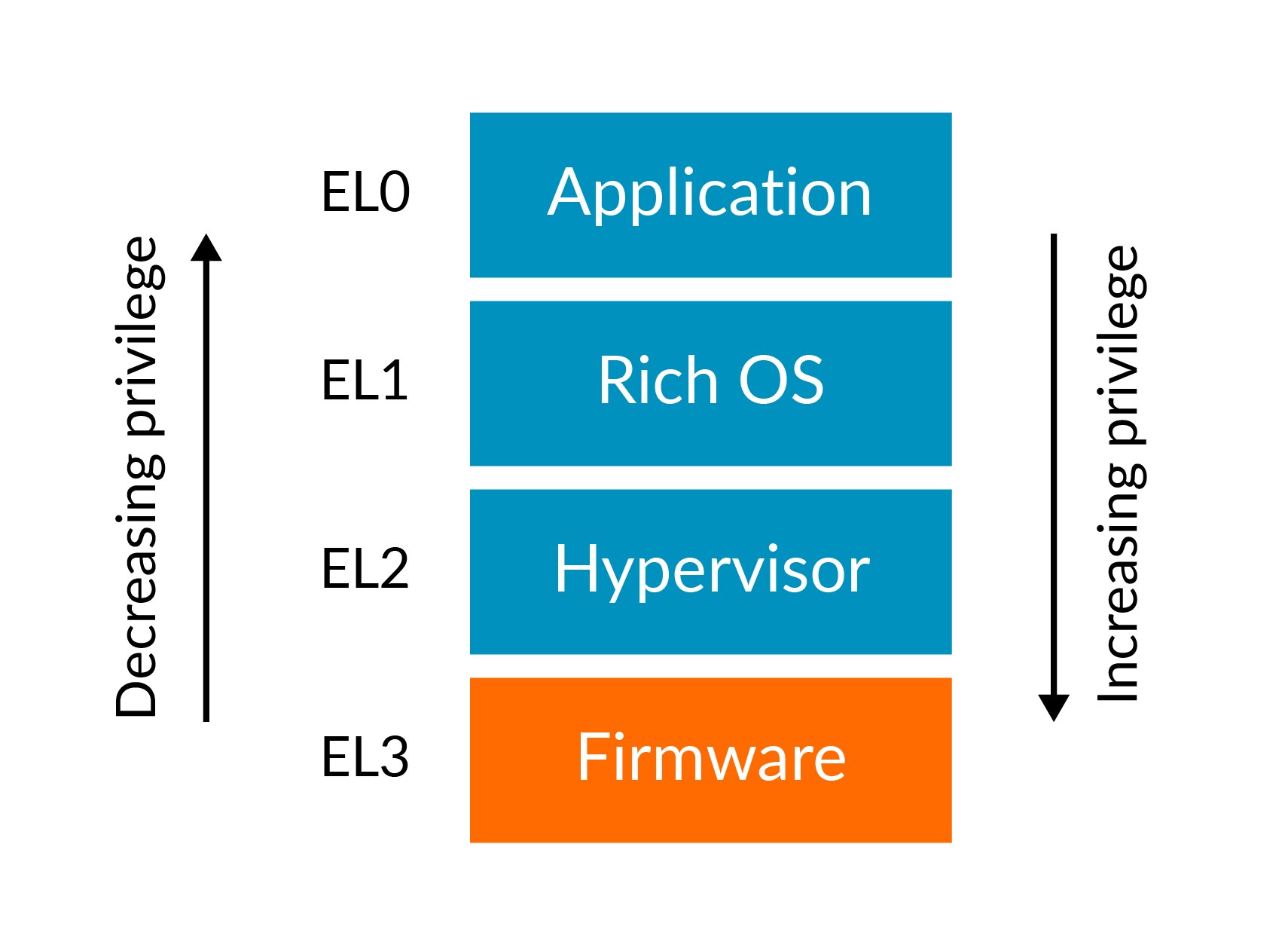 A common usage model has application code running at EL0, with an operating system running at EL1. EL2 is used by a hypervisor, with EL3 being reserved by low-level firmware and security code.

Note: The architecture does not enforce this software model, but standard software assumes this model. For this reason, the rest of this guide assumed this usage model.

There are two types of privilege relevant to this topic. The first is privilege in the memory system, and the second is privilege from the point of view of accessing processor resources. Both are affected by the current Exception level.

Armv8-A implements a virtual memory system, in which a Memory Management Unit (MMU) allows software to assign attributes to regions of memory. These attributes include read/write permissions, which can be configured with two degrees of freedom. This configuration allows separate access permissions for privileged and unprivileged accesses.

Because this memory configuration is programmed by software using the MMU’s translation tables, you should consider the privilege necessary to program those tables. The MMU configuration is stored in System registers, and the ability to access those registers is also controlled by the current Exception level.

The name of the System register indicates the lowest Exception level from which that register can be accessed. For instance, TTBR0_EL1 is the register that holds the base address of the translation table used by EL0 and EL1. This register cannot be accessed from EL0, and any attempt to do so will cause an exception to be generated.

The architecture has many registers with conceptually similar functions that have names that differ only by their Exception level suffix. These are independent, individual registers that have their own encodings in the instruction set and will be implemented separately in hardware. For example, the following registers all perform MMU configuration for different translation regimes. The registers have similar names to reflect that they perform similar tasks, but they are entirely independent registers with their own access semantics.

Note: EL1 and EL0 share the same MMU configuration and control is restricted to privileged code running at EL1. Therefore there is no SCTLR_EL0 and all control is from the EL1 accessible register. This model is generally followed for other control registers.