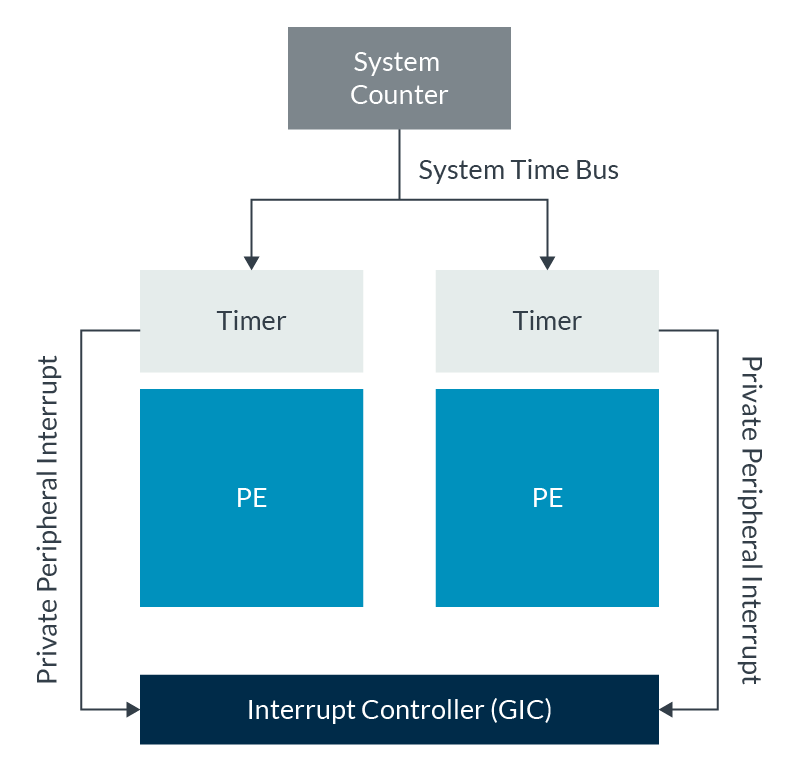 One physical system count value broadcasts to all cores. This means that all cores share the same view of the passing of time. Consider the following example:

In this example, the system count value that is seen by Device B can never be earlier than the timestamp in the message.

The System Counter measures real time. This means that it cannot be affected by power management techniques like Dynamic Voltage and Frequency Scaling (DVFS) or putting cores into a lower power state. The count must continue to increment at its fixed frequency. In practice, this requires the System Counter to be in an always-on power domain.

To save power, the System Counter can vary the rate at which it updates the count. For example, the System Counter could update the count by 10 every 10th tick of the clock. This can be useful when the connected cores are all in low power state. The system count still needs to reflect time advancing, but power can be saved by broadcasting fewer counter updates.

The option to scale the system count was introduced in Armv8.4-A. Instead of incrementing by one on every tick of the clock, the count can increment by X, where X is configured by software during system initialization. This feature allows the count to effectively increment faster or slower than the frequency of the counter.

To support scaling, the System Counter internally expands the counter value to 88 bits, as you can see in the following diagram:

The increment amount comes from a 32-bit register called CNTSCR, and its format is shown below:

The increment value is split into an integer part of 8 bits and a fractional part of 24 bits.

When scaling is enabled, on every tick the count is incremented by the value in CNTSCR. For example, if CNTSCR is set to 0x0180_0000, that means that the count increments by 1.5 (integer part 0x01, fraction part 0x80_0000) on every tick. This is illustrated in the following table:

Scaling can only be configured while the System Counter is disabled. Changing whether scaling is enabled, or the scaling factor, while the counter is running can result in unknown count values being returned.

The guidance in this section assumes that the System Counter implements the recommended Arm register interface.

The register frame CNTControlBase is used to configure the System Counter and is Secure access only on systems that support TrustZone. The registers in this frame are shown in the following table:

To enable the System Counter, software must select an update frequency and set the counter enable.