This section of the guide analyzes some example sequences of read and write transactions, to help you understand the relationships between the different AXI channels. This section also explains some of the rules that govern transactions and how transfer IDs can support out-of-order transactions.

We will also look at:

Examples of simple transactions help to explain the relationships between the different AXI channels.

The following diagram shows a time representation of several valid transactions on the five channels of an AXI3 or AXI4 interface:

The different transactions in this example are as follows:

All of these examples are valid transactions.

The following diagram shows the same sequence of read and write transactions in a different, but still valid, timeline:

The master uses the Write Address channel, AW, to start a new transaction by transferring a new address B to the slave before it has finished transferring the data for transaction A on the W channel.

At the same time, the master uses the Read Address channel to transfer in sequence the read addresses C and D for the slave. The slave responds in sequence to the two read requests.

This example shows a different valid combination of read and write transactions happening on the different channels. This shows the flexibility of the AXI protocol and the possibility to optimize the interconnect performance.

The ID signal buses are as follows:

You should also remember these two important AXI parameters for ID signals:

There are three AXI ordering rules for write transactions.

The rules are as follows:

There are three ordering rules for read transactions.

The rules are as follows:

Read and write channels have no ordering rules in relation to each other. This means that they can complete in any order. So, if a master requires ordering for a specific sequence of reads and writes, the master must ensure that the transaction order is respected by explicitly waiting for transactions to complete before issuing new ones.

The following diagram shows an example where the master requires a specific ordering for a write-read-write transaction sequence from an address:

The sequence of operations is as follows:

An unaligned transfer is where the AxADDR values do not have to be aligned to the width of the transaction. For example, a 32-bit data packet that starts at a byte address of 0x1002 is not aligned to the natural 32-bit address boundary because 0x1002 is not exactly divisible by 0x20.

The following example shows a 5-beat 32-bit transfer starting at an unaligned address of 0x01: 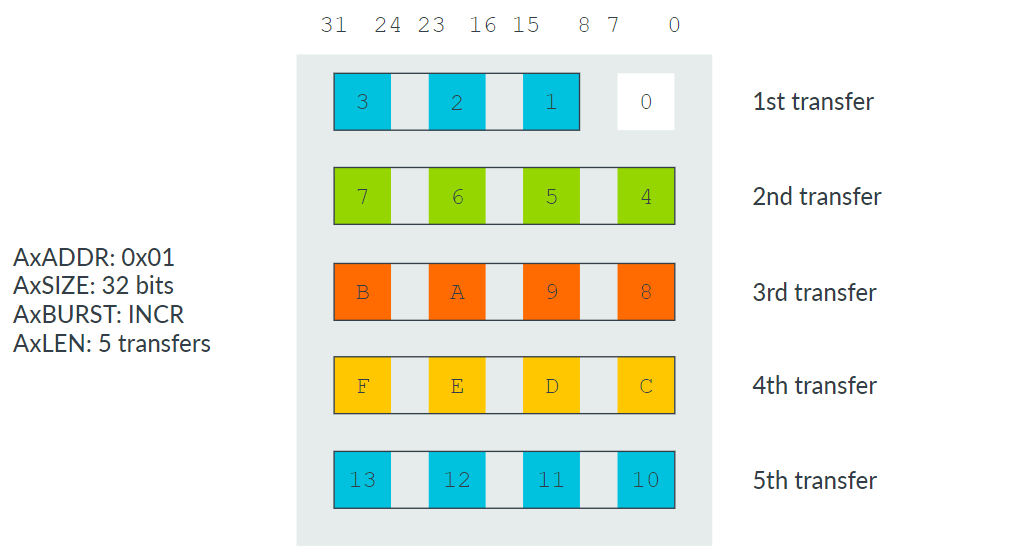 If the transaction were aligned to a start address of 0x00, the result would be a five-beat burst with a width of four bytes giving a maximum data transfer of 20 bytes. However, we have an unaligned start address of 0x1. This reduces the total data volume of the transfer, but it does not mean a final unaligned transfer to complete the burst and make up the volume. In this example, the first transfer starts at address 0x01 and contains three bytes. All the following transfers in the burst are aligned with the bus width and are composed of four bytes each. The following example shows a five-beat 16-bit-sized transaction starting at address 0x03: 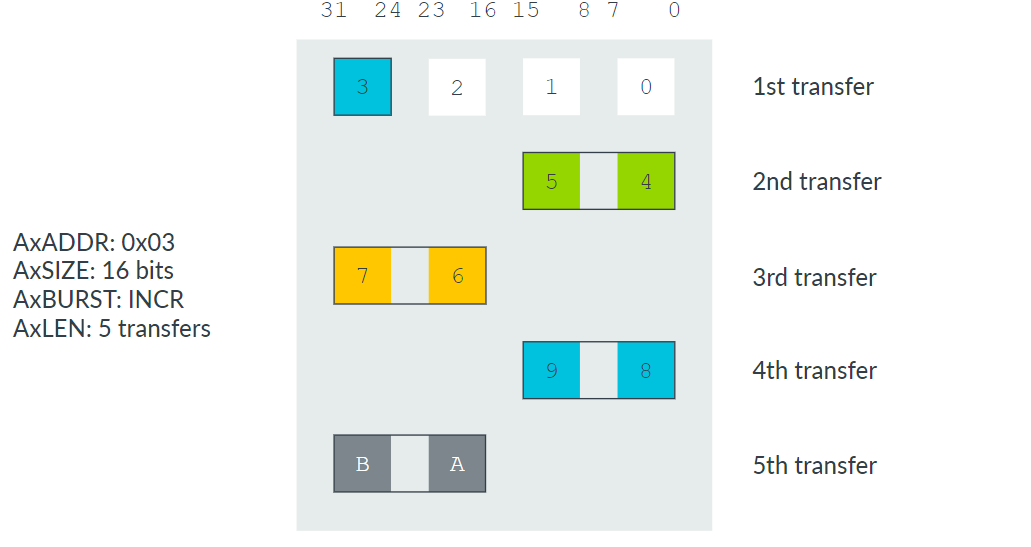 If the transaction were aligned to a start address of 0x00, the result would be a five-beat burst with a width of two bytes giving a maximum data transfer of 10 bytes. In this example, the first transfer starts at an unaligned address of 0x03 and contains one byte. All the following transfers in the burst are aligned with the bus width and are composed of two bytes each.

The AXI protocol does not require the slave to take special action based on any alignment information from the master.

The AXI protocol supports mixed-endian structures in the same memory space by using Big Endian-8 (BE-8) mode. Compared to little-endian mode, the same byte lanes are used in BE-8 mode, but the order of the bytes is reversed.

Note: Mixed-endian structures using BE-32 are more complicated than those using BE-8, because byte lanes are not the same as little-endian mode.

The following example shows both little-endian and big-endian representations of the same four-byte word:

The following example shows both little-endian and big-endian representations of the same two-byte word:

Finally, for a single byte, there is no difference between little-endian and big-endian mode, as shown in the following example:

In both cases, the byte uses byte lane 0.

In a configurable endianness component like an Arm core, which supports BE-8, the reordering of the bytes should be performed internally, so that nothing has to be done at the interconnect level. On the other hand, a custom device that is connected to the AXI interconnect, which is BE-8 by nature, would already have the correct order of bytes. Having BE-8 in the AXI protocol eases the support for dynamic endianness switching.

This section of the guide highlights some of the most important attributes for configuring AXI write and read channels.

The write interface attributes include the following:

The read interface attributes include the following: