So far in this guide, we have concentrated on the processor, but TrustZone is much more than just a set of processor features. To take advantage of the TrustZone features, we need support in the rest of the system as well.

Here is an example of a TrustZone-enabled system: 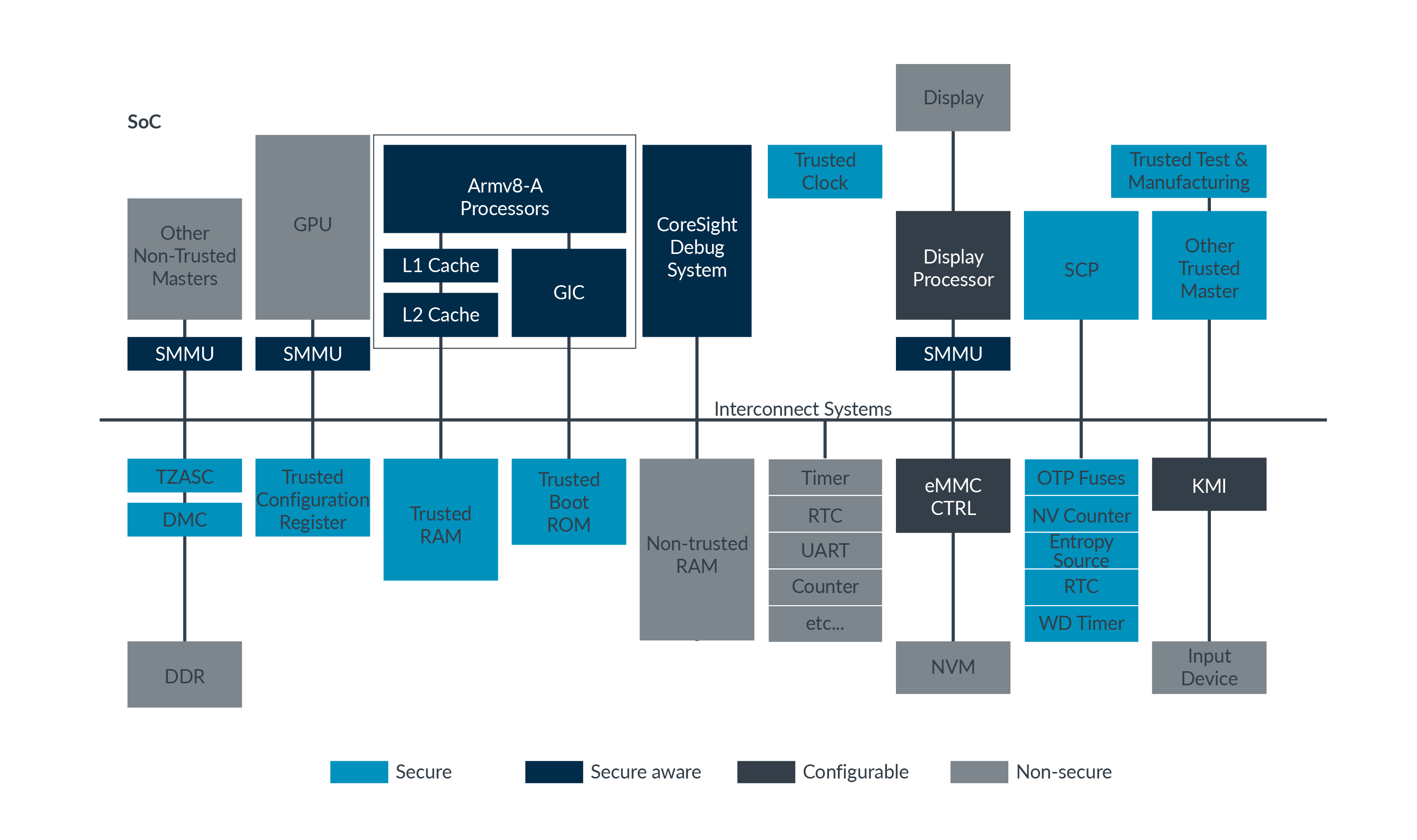 This section explores the key components in this system and their role in TrustZone.

Note: In AMBA AXI and ACE, the AxPROT[1] signal is used to specify which address space is being accessed. Like with the NS bit in the translation tables, 0 indicates Secure and 1 indicates Non-secure.

In general, we can talk about two types of slave devices:

TrustZone is sometimes referred to as a slave-enforced protection system. The master signals the security of its access and the memory system decides whether to allow the access. How is the memory system-based checking done?

In most modern systems, the memory system-based checking is done by the interconnect. For example, the Arm NIC-400 allows system designers to specify for each connected slave:

This approach works well for either TrustZone-aware devices or those devices that live entirely within one address space. For larger memories, like off-chip DDR, we might want to partition the memory into Secure and Non-secure regions. A TrustZone Address Space Controller (TZASC) allows us to do this, as you can see in the following diagram: 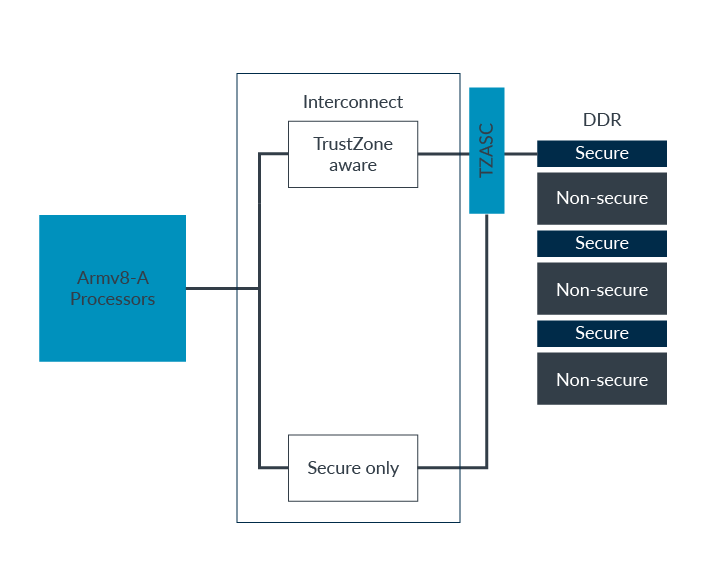 The TZASC is similar to a Memory Protection Unit (MPU), and allows the address space of a device to split into several regions. With each region specified as Secure or Non-secure. The registers to control the TZASC are Secure access only, permitting only Secure software to partition memory.

An example of a TZASC is the Arm TZC-400, which supports up to nine regions.

Note: Off-chip memory is less Secure than on-chip memory, because it is easier for an attacker to read or modify its contents. On-chip memories are more secure but are much more expensive and of limited size. As always, we must balance cost, usability, and security. Be careful when deciding which assets you want in off-chip memories and which assets need to be kept on-chip.

Next, we will look at the bus masters in the system, as you can see in the following diagram: 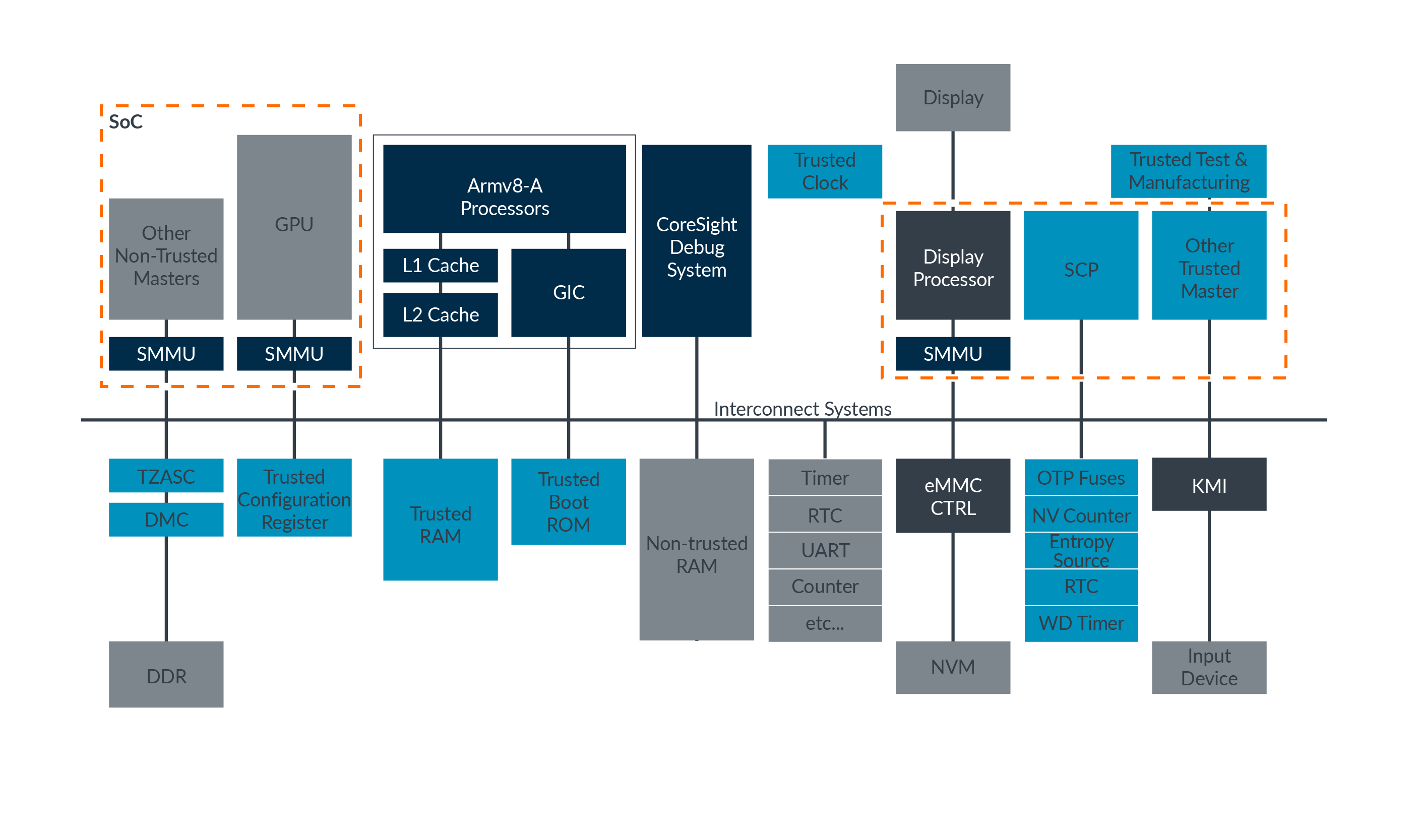 The A-profile processors in the system are TrustZone aware and send the correct security status with each bus access. However, most modern SoCs also contain non-processor bus masters, for example, GPUs and DMA controllers.

Like with slave devices, we can roughly divide the master devices in the system into groups:

What system resources do non-TrustZone-aware masters need to access? Based on the answer to this question, we could pick one of several approaches: 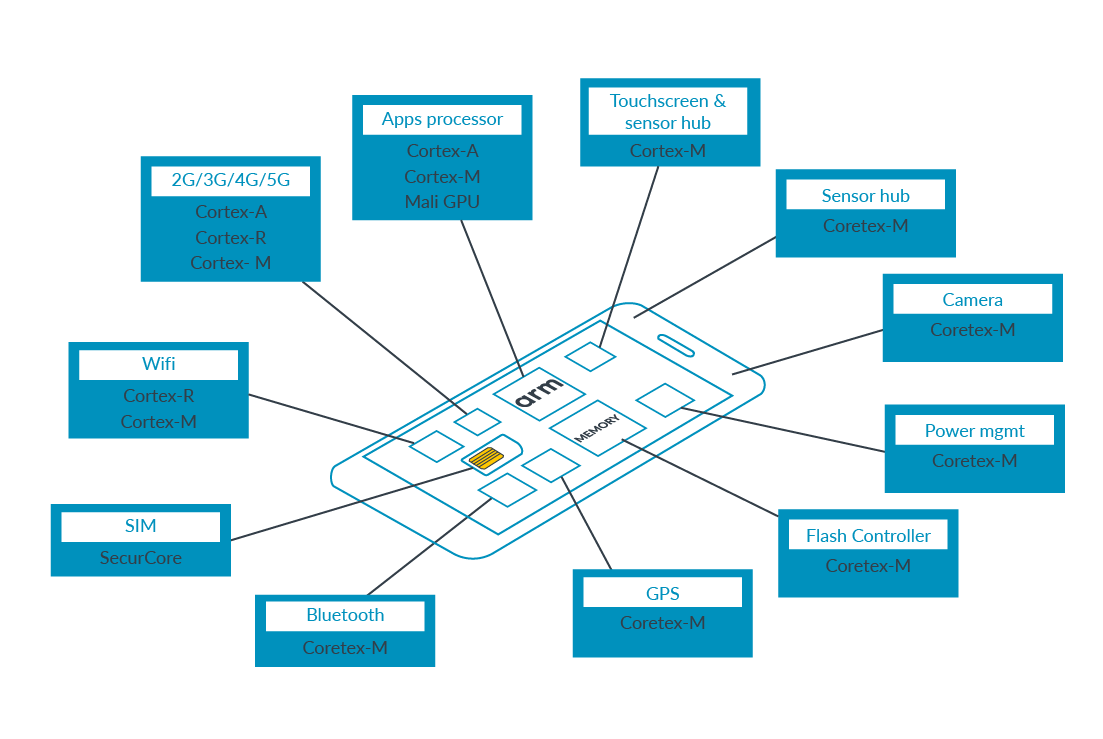 The R profile does not support the two Security states in the way that the A profile does. This means that software running on those processors cannot control the outputted physical address space. In this way, they behave much like other non-TrustZone aware bus masters. The same is true for M profile processors that do not implement TrustZone for Armv8-M.

Often these processors only need to access a single physical address space. Using our example of a mobile device, the processors typically include an M-profile processor for low-level system control. This is sometimes called a System Control Processor (SCP). In many systems, the SCP would be a Secure-only device. This means that it only needs the ability to generate bus secure accesses.

Next, we will look at the interrupts in the system, as you can see in the following diagram: 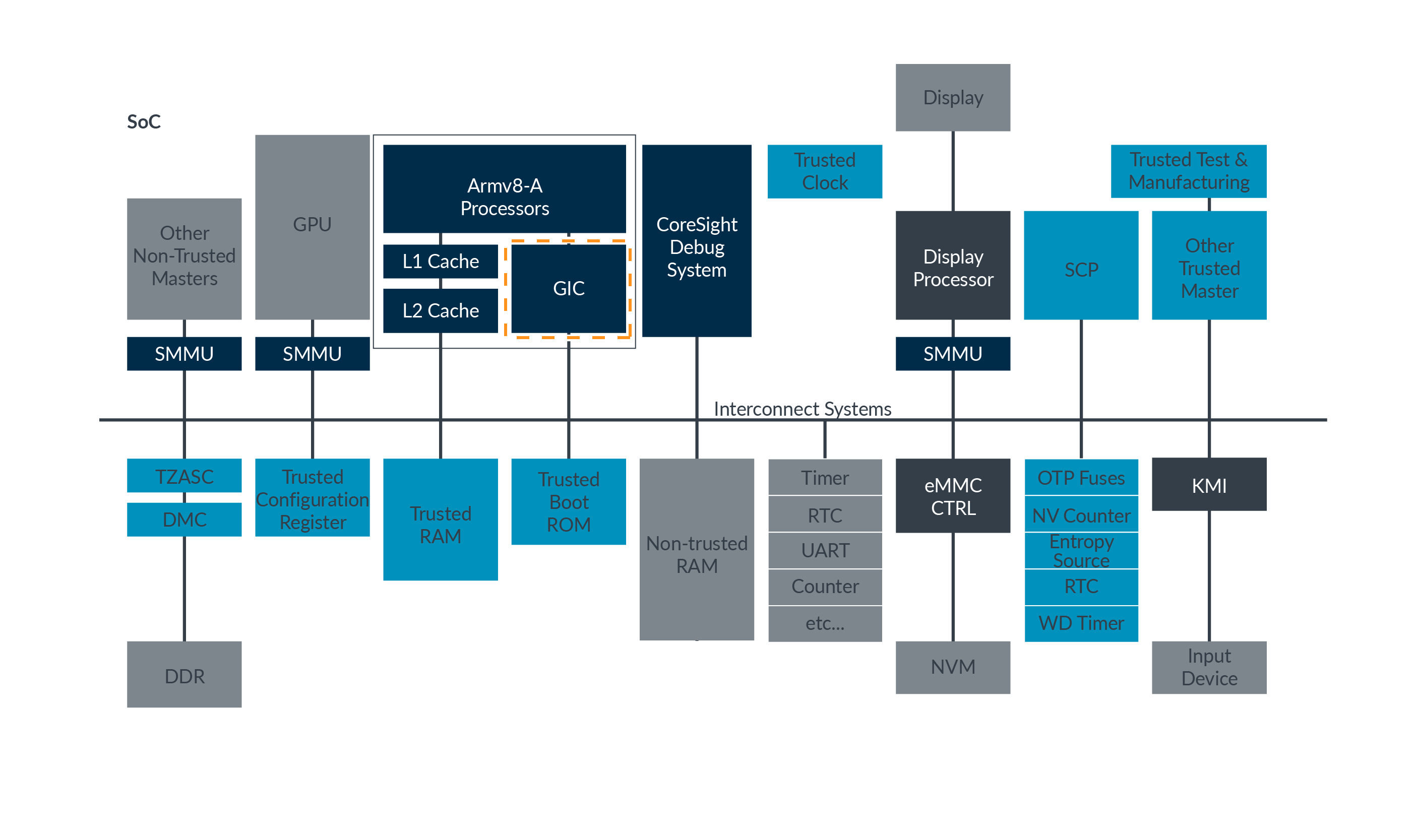 The Generic Interrupt Controller (GIC), supports TrustZone. Each interrupt source, called an INTID in the GIC specification, is assigned to one of three Groups:

This is controlled by software writing to the GIC[D|R]_IGROUPR<n> and GIC[D|R]_IGRPMODR<n> registers, which can only be done from Secure state. The allocation is not static. Software can update the allocations at run-time.

For INTIDs that are configured as Secure, only bus secure accesses can modify state and configuration. Register fields corresponding to Secure interrupts are read as 0s to Non-secure bus accesses.

For INTIDs that are configured as Non-secure, both Secure and Non-secure bus accesses can modify state and configuration.

The processor has two interrupt exceptions, IRQ and FIQ. When an interrupt becomes pending, the GIC uses different interrupt signals depending on the group of the interrupt and the current Security state of the processor:

Remember that Group 0 interrupts are typically used for the EL3 firmware. This means that:

The following example shows how the exception routing controls could be configured: 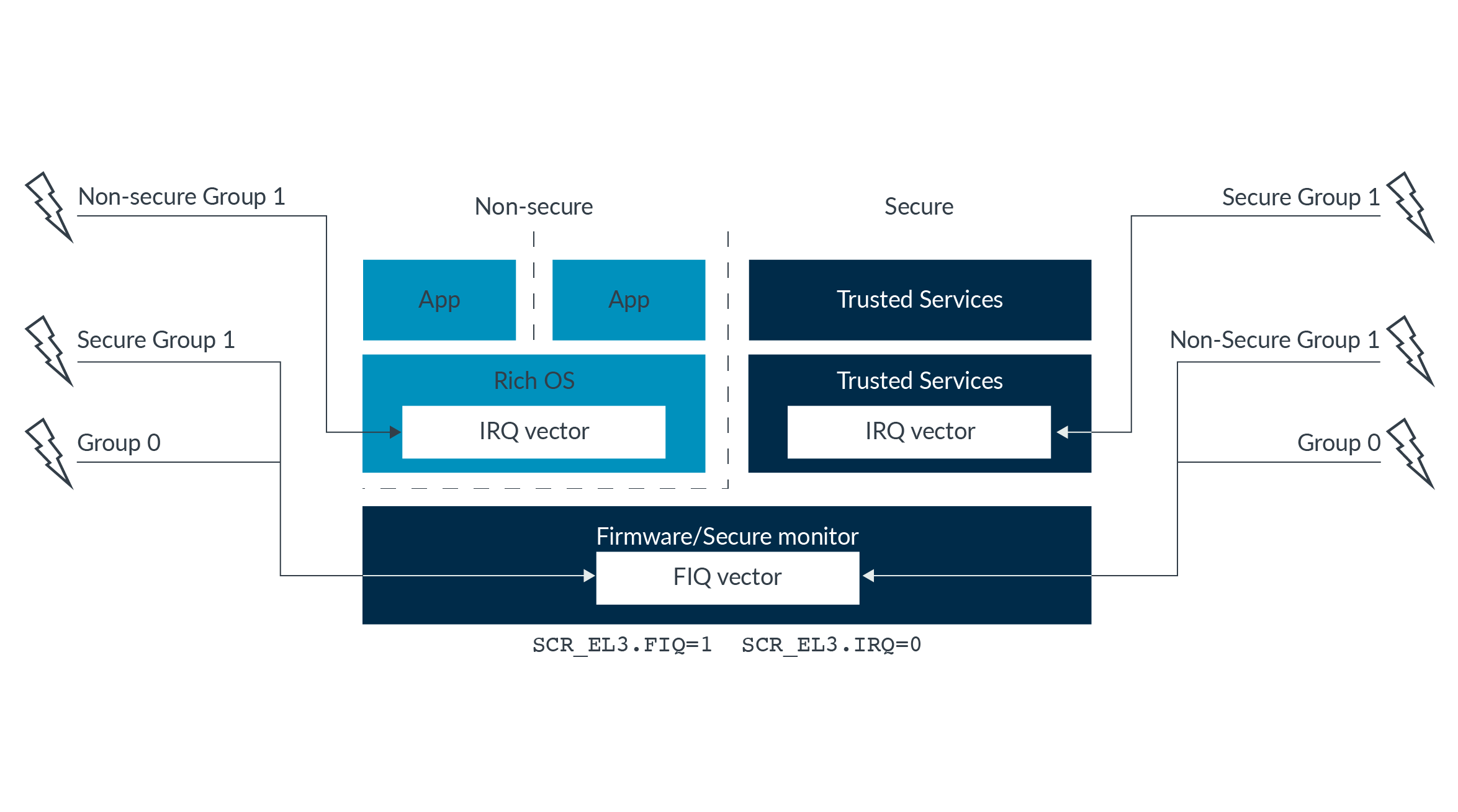 The preceding diagram shows one possible configuration. Another option that is commonly seen is for FIQs to be routed to EL1 while in Secure state. The Trusted OS treats the FIQ as a request to yield to either the firmware or to Non-secure state. This approach to routing interrupts gives the Trusted OS the opportunity to be exited in a controlled manor.

Next, we will look at the debug and trace components in the system, as you can see in the following diagram: 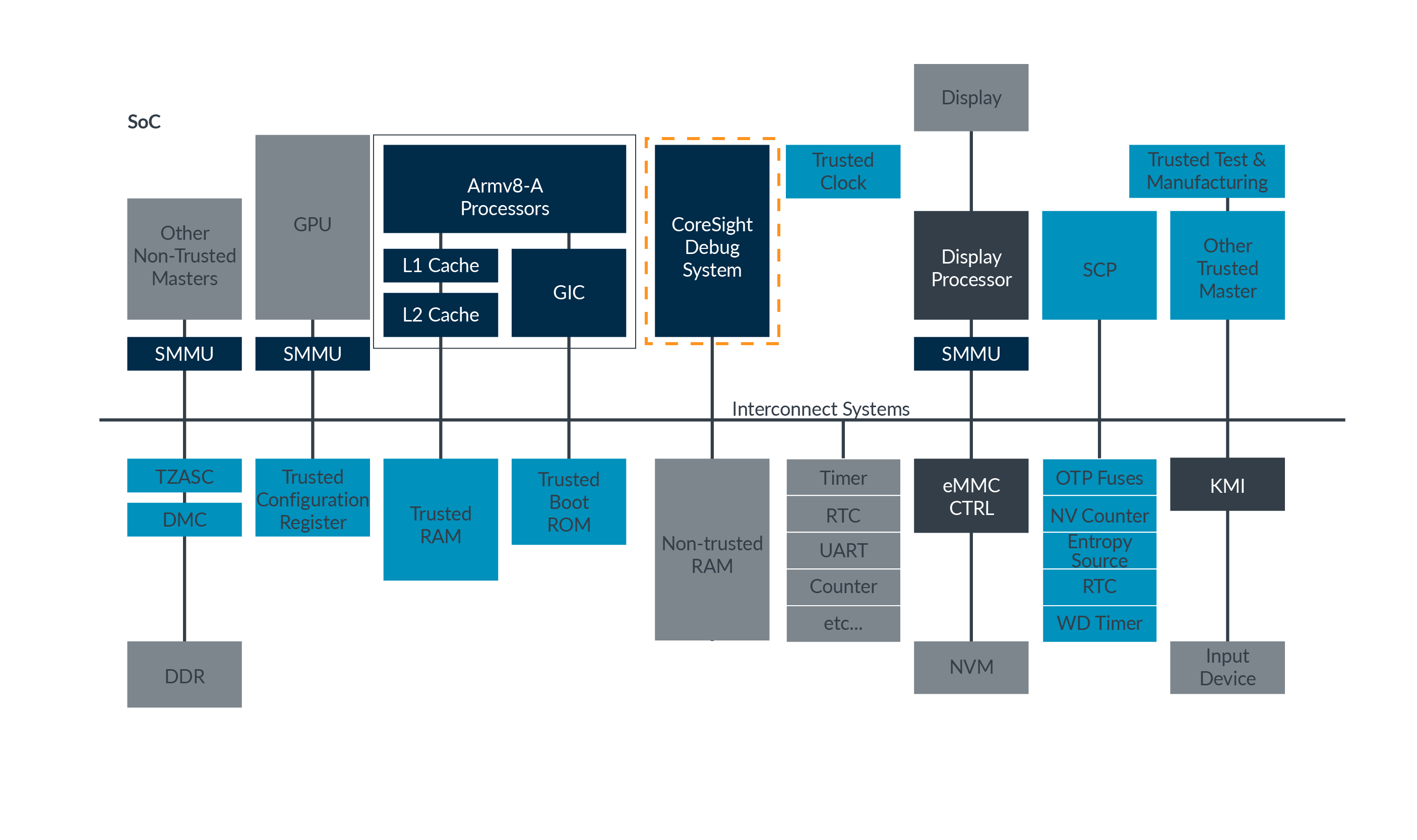 Modern Arm systems include extensive features to supporting debugging and profiling. With TrustZone, we must ensure that these features cannot be used to compromise the security of the system.

Regarding debug features, consider the development of a new SoC. Different developers are trusted to debug different parts of the system. The chip company engineers need, and are trusted to, debug all parts, including the Secure state code. Therefore, all the debug features should be enabled.

When the chip ships to an OEM, they still need to debug the Non-secure state software stack. However, the OEM might be prevented from debugging the Secure state code.

In the shipping product containing the chip, we might want some debug features for application developers. But we also want to limit the ability to debug the code of the silicon provider and the OEM.

Signals to enable the different debug, trace, and profiling features help us deal with this situation. This includes separate signals to control use of the features in Secure state and Non-secure state.

Continuing with the debug example, these signals include:

Note: These two signals are examples. There are other debug authentication signals. Refer to the Technical Reference Manual of your processor for a complete list.

Here is an example of how we might use these signals:

Because we want different signal values at different stages of development, it is common to connect the signals using e-fuses or authentication blocks. Here is an example:

By blowing fuses during manufacture, external debug can be permanently disabled. Using fuses does make in-field debug more difficult. When the fuses are blown, they cannot be unblown. An authentication module is more flexible.

Finally, we will look at the other devices in the system, as you can see in the following diagram:

Our example TrustZone-enabled system includes several devices which we have not yet covered, but which we need to build a practical system.

The Trusted Base System Architecture (TBSA) is a set of guidelines from Arm for system designers. TBSA provides recommendations on what resources different use cases require, for example, how many bits of OTP are required.