TrustZone in the processor

In the Arm architecture, there are two Security states: Secure and Non-secure. These Security states map onto the Trusted and Normal worlds that we referred to in What is TrustZone?

At EL0, EL1, and EL2 the processor can be in either Secure state or Non-secure state, which is controlled by the SCR_EL3.NS bit. You often see this written as:

EL3 is always in Secure state, regardless of the value of the SCR_EL3.NS bit. The arrangement of Security states and Exception levels is shown here:

Note: Support for Secure EL2 was first introduced in Armv8.4-A and support remains optional in Armv8-A.

If the processor is in NS.EL1 and software wants to move into S.EL1, how does it do this?

To change Security state, in either direction, execution must pass through EL3, as shown in the following diagram:

The preceding diagram shows an example sequence of the steps involved in moving between Security states. Taking these one step at a time:

There is more to changing Security state than just moving between the Exception levels and changing the SCR_EL3.NS bit. We also must consider processor state.

There is only one copy of the vector registers, the general-purpose registers, and most System registers. When moving between Security states it is the responsibility of software, not hardware, to save and restore register state. By convention, the piece of software that does this is called the Secure Monitor. This makes our earlier example look more like what you can see in the following diagram: 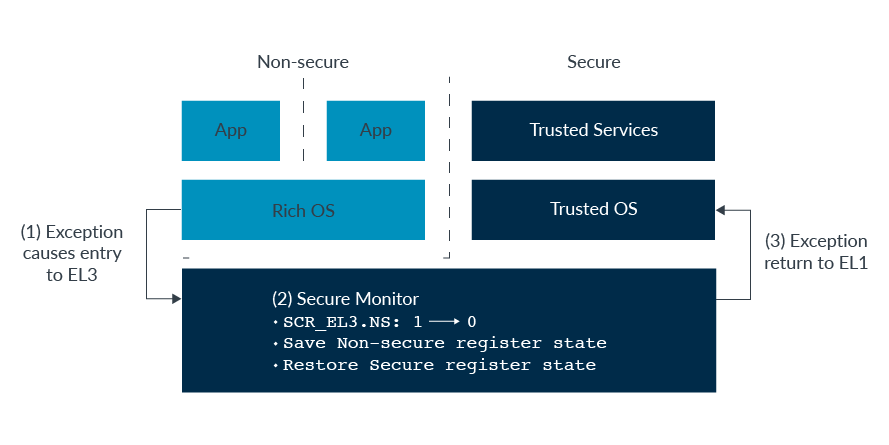 Trusted Firmware, an open-source project that Arm sponsors, provides a reference implementation of a Secure Monitor. We will discuss Trusted Firmware later in the guide.

A small number of registers are banked by Security state. This means that there are two copies of the register, and the core automatically uses the copy that belongs to the current Security state. These registers are limited to the ones for which the processor needs to know both settings at all times. An example is ICC_BPR1_EL1, a GIC register that is used to control interrupt preemption. Banking is the exception, not the rule, and will be explicitly called out in the Architecture Reference Manual for your processor.

When a System register is banked, we use (S) and (NS) to identify which copy we are referring to. For example, ICC_BPR1_EL1(S) and ICC_BPR1_EL1(NS). 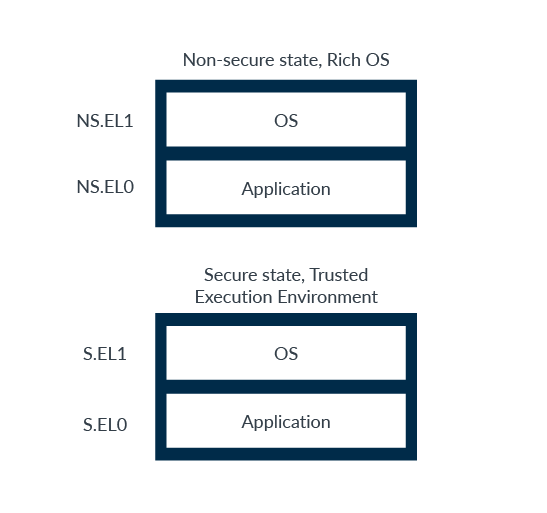 When writing addresses, it is convention to use prefixes to identify which translation regime is being referred to: 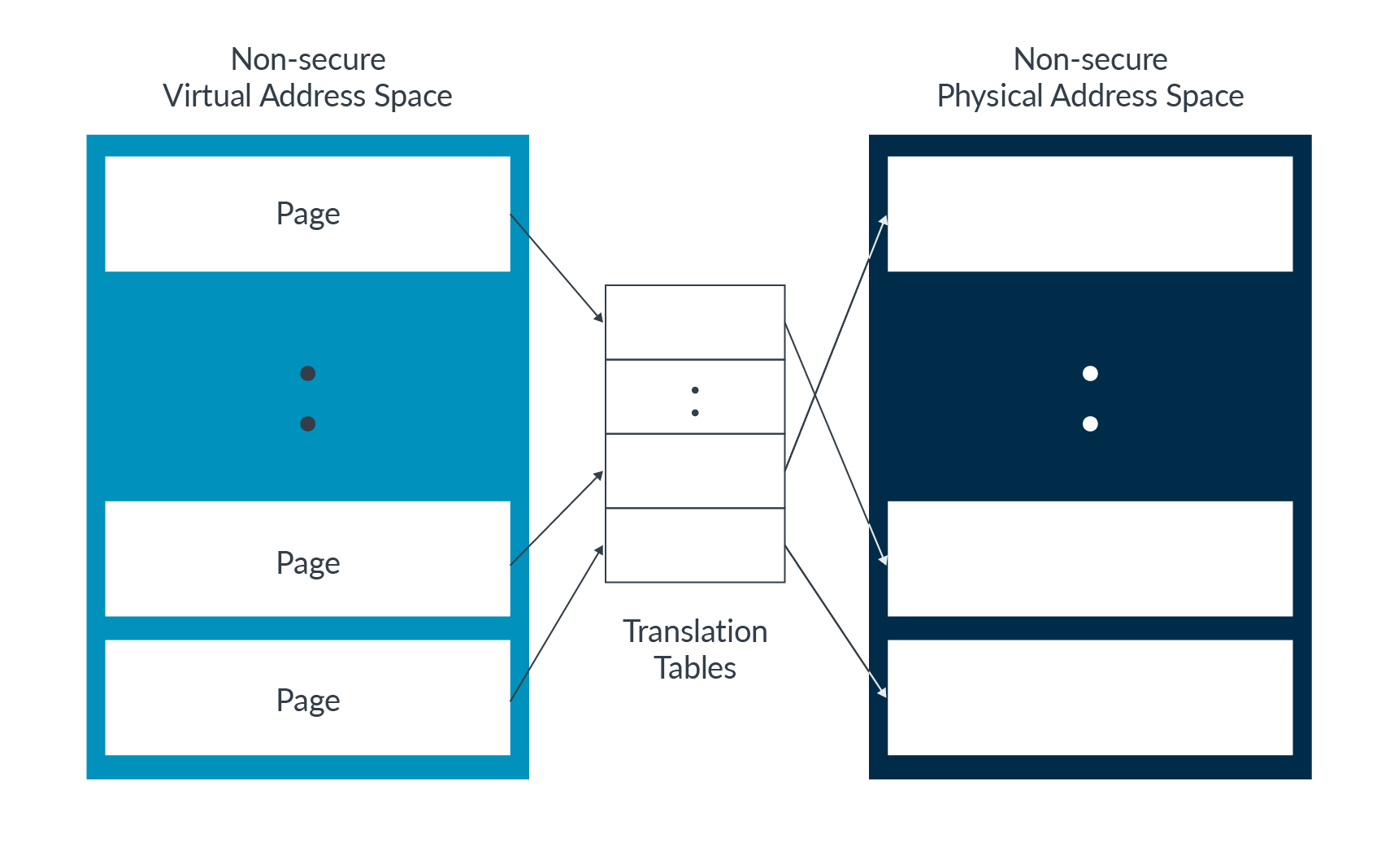 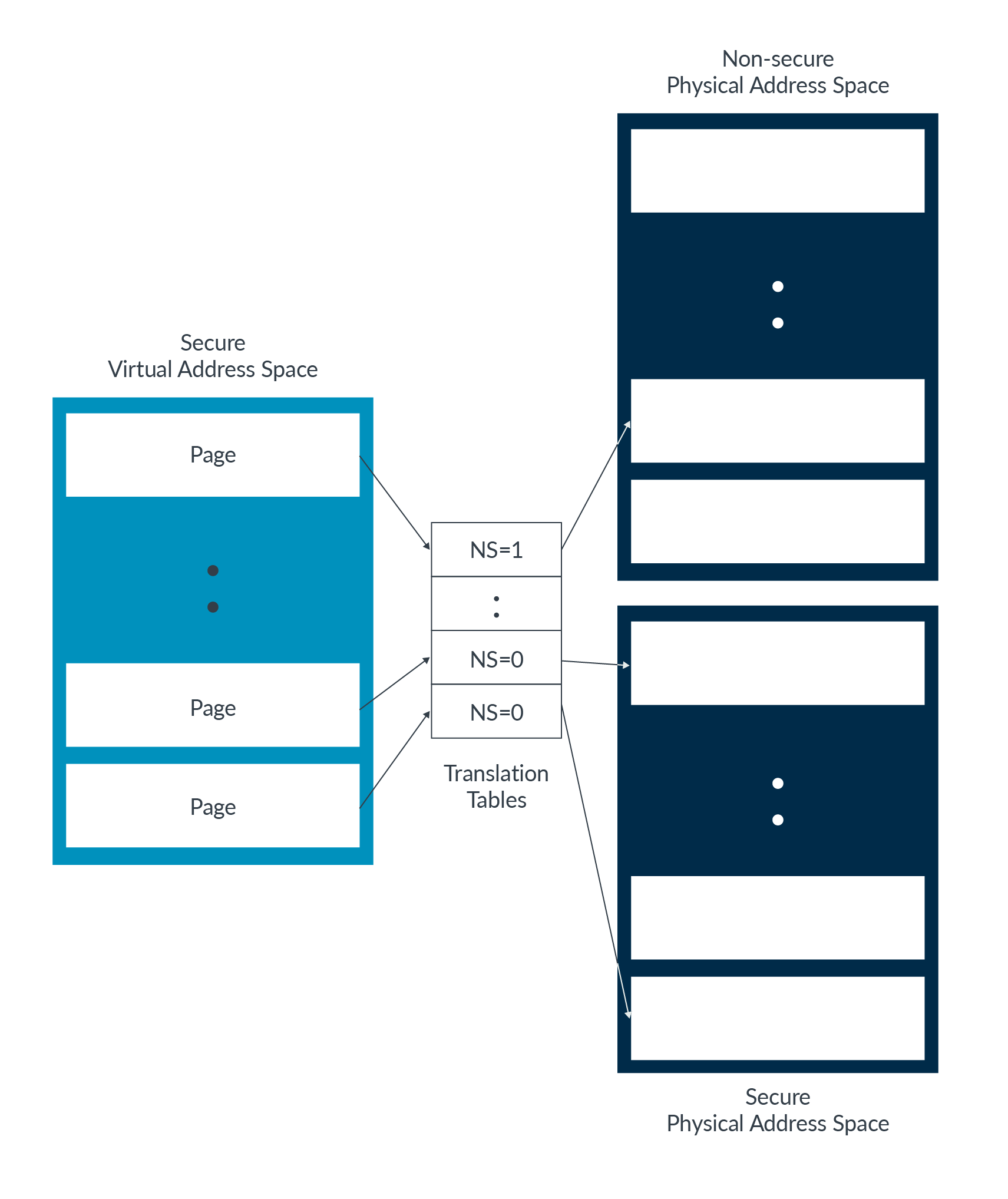 Note: In Secure state, when the Stage 1 MMU is disabled all addresses are treated as Secure.

Note: It can helpful to think of the address space as an extra address bit on the bus.

In the Arm architecture, data caches are physically tagged. The physical address includes which address space the line is from, shown here: Translation Look aside Buffer (TLBs) cache recently used translations. The processor has multiple independent translation regimes. The TLB records which translation regime, including the Security state, an entry represents. While the structure of TLBs is implementation defined, the following diagram shows an example: 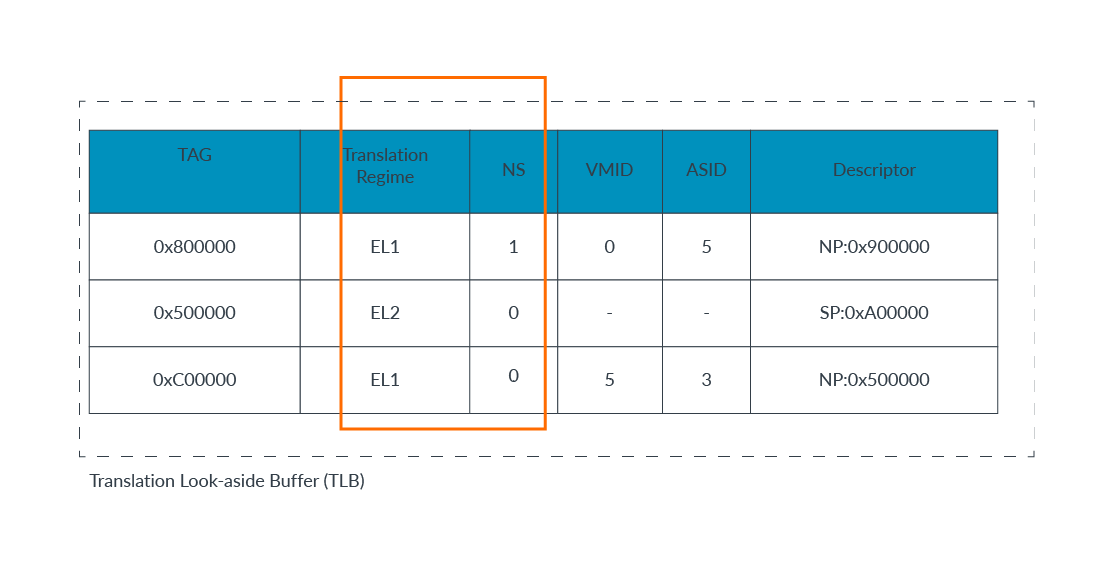 For example, executing TBLI ALLE1 at EL3 with:

SMC's are normally used to request services, either from firmware resident in EL3 or from a service that is hosted by the Trusted Execution Environment. The SMC is initially taken to EL3, where an SMC dispatcher determines which entity the call will be handled by. This is shown in the following diagram: 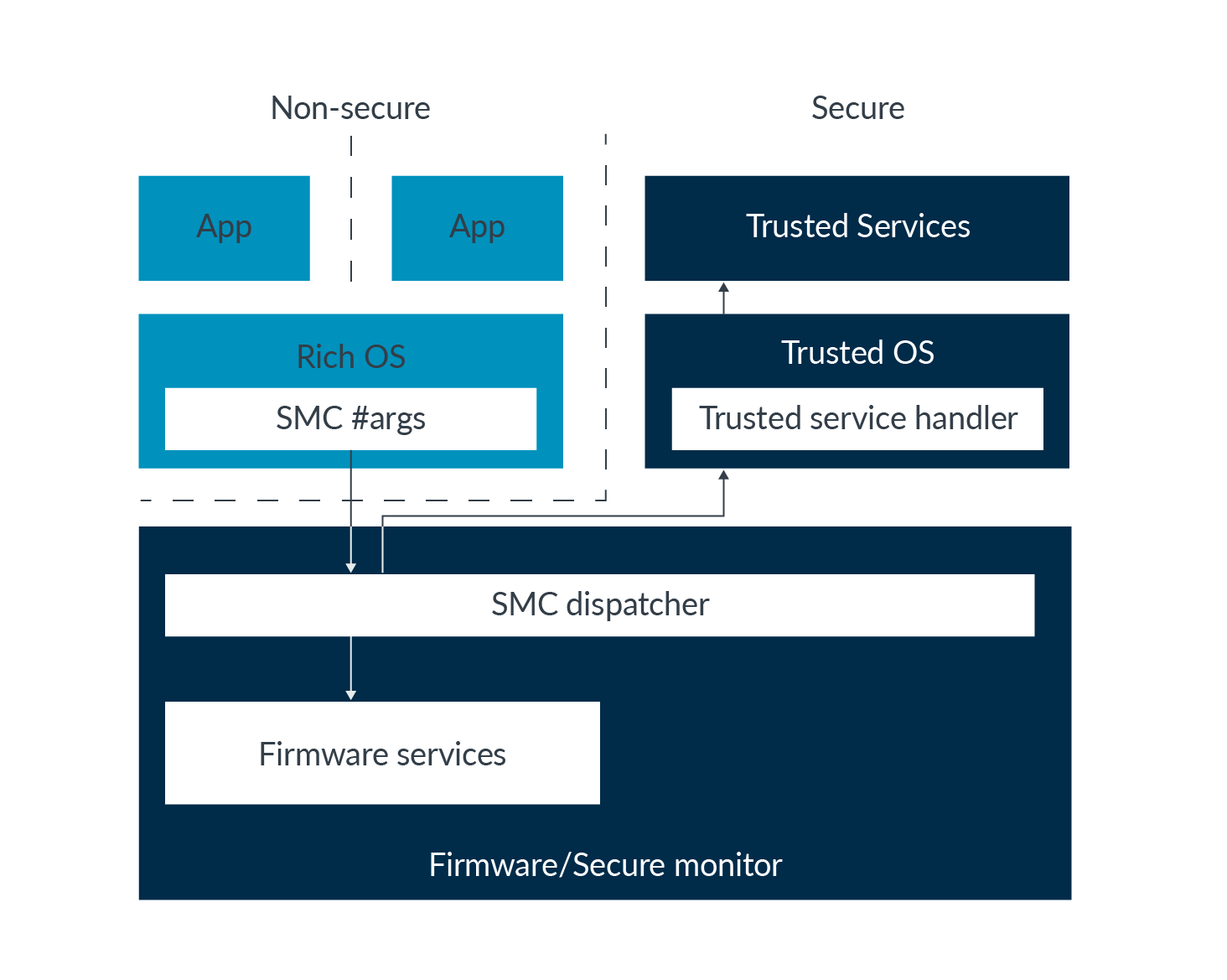 In a bid to standardize interfaces, Arm provides the SMC Calling Convention (DEN0028) and Power State Coordination Interface Platform Design Document (DEN0022). These specifications lay out how SMCs are used to request services.

Execution of an SMC at EL1 can be trapped to EL2. This is useful for hypervisors, because hypervisors might want to emulate the firmware interface that is seen by a virtual machine.

Note: The SMC instruction is not available at EL0 in either Security state.

We discuss exceptions later in System architecture when we look at the interrupt controller.

When virtualization was first introduced in Armv7-A, it was only added in the Non-secure state. Until Armv8.3, the same was true for Armv8 as illustrated in the following diagram:

As previously described in TrustZone in the processor, EL3 is used to host firmware and the Secure Monitor. Secure EL0/1 host the Trusted Execution Environment (TEE), which is made up of the Trusted services and kernel.

There was no perceived need for multiple virtual machines in Secure state. This means that support for virtualization was not necessary. As TrustZone adoption increased, several requirements became apparent:

The solution was to introduce support for EL2 in Secure state, which came with Armv8.4-A, as you can see in this diagram:

Rather than a full hypervisor, S.EL2 typically hosts a Secure Partition Manager (SPM). An SPM allows the creation of the isolated partitions, which are unable to see the resources of other partitions. A system could have multiple partitions containing Trusted kernels and their Trusted services.

A partition can also be created to house platform firmware, removing the need to have that code that is run at EL3.