Using the SoC-400 to create a debug subsystem

The SoC-400 differs from other pieces of IP shown in the example SoC because it is not a single piece of IP. The SoC-400 instead consists of several components. You can use these components to build an infrastructure to debug, monitor, and optimize an SoC design. These components include buses, control and access components, and trace links. Most of these components are configurable.

System designers use SoC-400 components to create a subsystem that is designed to meet the requirements of a specific SoC. The complexity of the subsystem depends on the SoC which the subsystem is part of. In this SoC, the subsystem collects trace output from the four cores of both Cortex-A53 clusters.

Note: In this guide, the terms SoC and SoC-400 refer to different things. SoC refers to the example dual Cortex-A53 System on Chip, which is the subject of this guide. The SoC-400 is a piece of Arm IP that contains multiple components. The example SoC in this guide contains an SoC-400 subsystem, which is shown as a single entity in System diagram.

The following diagram shows an SoC-400 subsystem that is suitable for our example SoC: 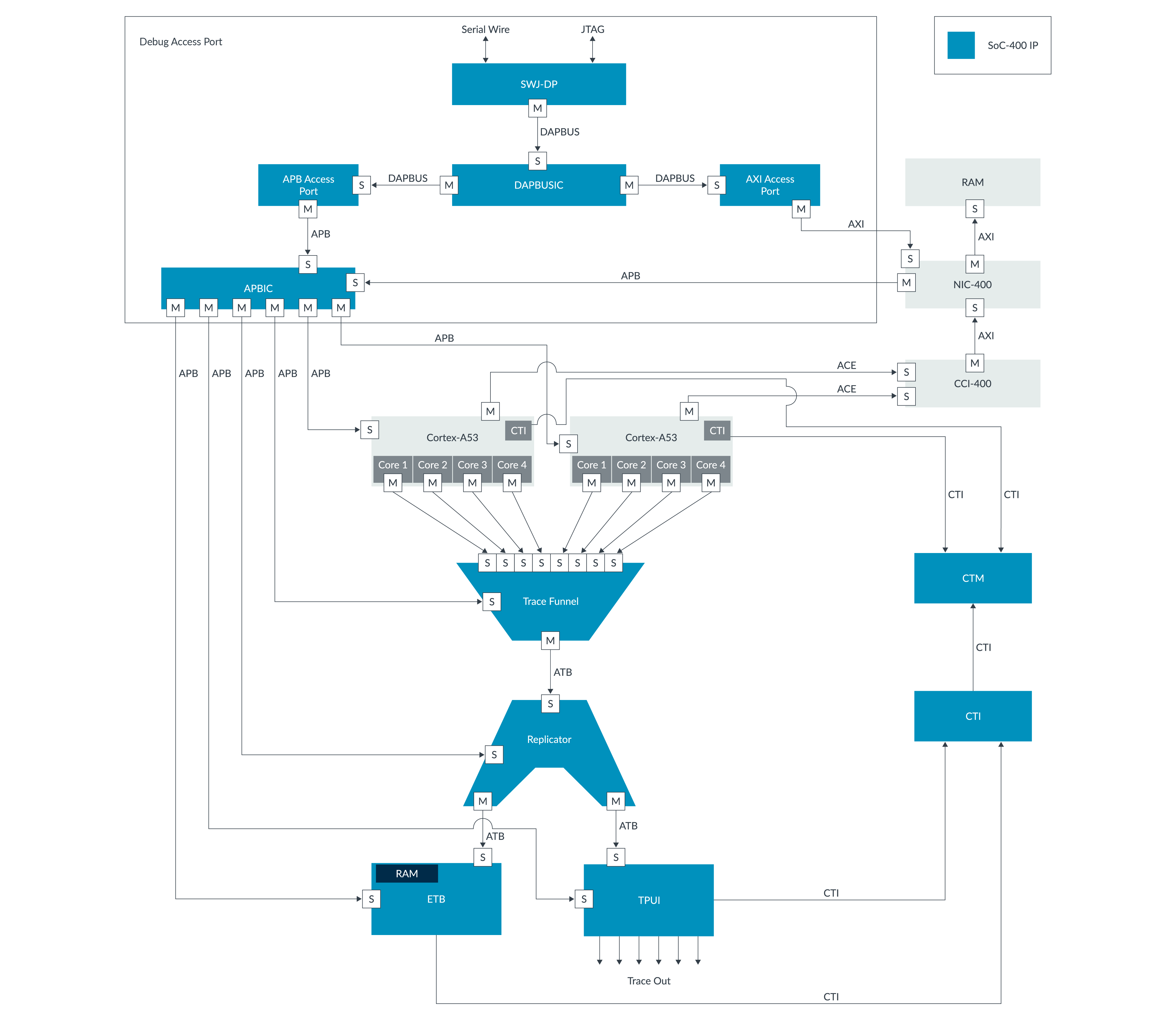 Now let’s explore the components in the SoC-400 subsystem that we have described, including their configuration options and interfaces:

A Serial Wire JTAG Debug Port (SWJ–DP) allows you to connect either a Serial Wire Debug (SWD) or JTAG probe to the SoC-400 subsystem, and therefore the SoC itself. This component is accessible from outside the SoC. In other words, the SWJ-DP forms the main entry point into an SoC for debugging it.

In addition to the external connection, the SWJ-DP contains a single DAPBUS master port interface. This interface connects to the Debug Access Port Bus interconnect (DAPBUSIC) in an SoC-400 subsystem.

A Debug Access Port Bus Interconnect (DAPBUSIC) allows the SWJ-DP to combine with Access Ports (APs). This provides a route from outside the SoC to the components within.

The DAPBUSIC has the following interfaces:

The APB Access Port provides a single APB master interface, and allows conversion from a DAPBUS interface to an APB interface.

The AXI Access Port provides a single AXI master interface and facilitates conversion from a DAPBUS interface to an AXI interface. AXI-AP is typically used to provide an access path to the SoC memory. You can also see the connection in the System diagram. If the CPUs hang, the AXI-AP can provide another path to the system memory.

The APB Interconnect (APBIC) facilitates multiple master connections to APB interfaces on components within the SoC-400 subsystem. Connections from external CoreSight components in the SoC are also facilitated.

The APBIC has the following interfaces:

The CTI provides an interface that enables events broadcasting in the system.

Note: To avoid combinatorial timing loops, a register slice that is a forward, reverse, or full register slice must be instantiated between the cascaded funnels.

In this system, the trace output from all cores of both Cortex-A53 clusters are combined into one trace funnel.

A trace funnel has the following interfaces:

A trace replicator has the following interfaces:

The Embedded Trace Buffer (ETB) provides on-chip storage of trace data in RAM. When designing the SoC-400 subsystem, you can configure the size of the RAM for ETB and then implement the required RAM.

The ETB contains a formatter that combines the source data and IDs into a single data stream before storing the data in RAM. The formatter operates in an identical manner to the formatter in the TPIU.

The ETB has the following interfaces:

The TPIU inserts source ID information into the trace stream. The formatter operates in an identical manner to the formatter in the ETB.

The TPIU has the following interfaces: