The Corstone-700 system architecture combines Cortex-A32 and up to two Cortex-M systems of choice (example integration provided with Cortex-M3). Corstone-700 is built with many advanced features:

Corstone-700 also has two ready-available prototyping platforms for early software prototyping: A Fixed Virtual Platform (FVP) and an FPGA-based implementation on MPS3. Both platforms are supported by an open-source software stack, with drivers and OS support for all processing elements. The reference stack is based on Linux for Cortex-A32 processor, RTX for Cortex-M3 processor, and provides a firmware running on the Secure Enclave.

The following diagram demonstrates an example integration of the SSE-700 subsystem: 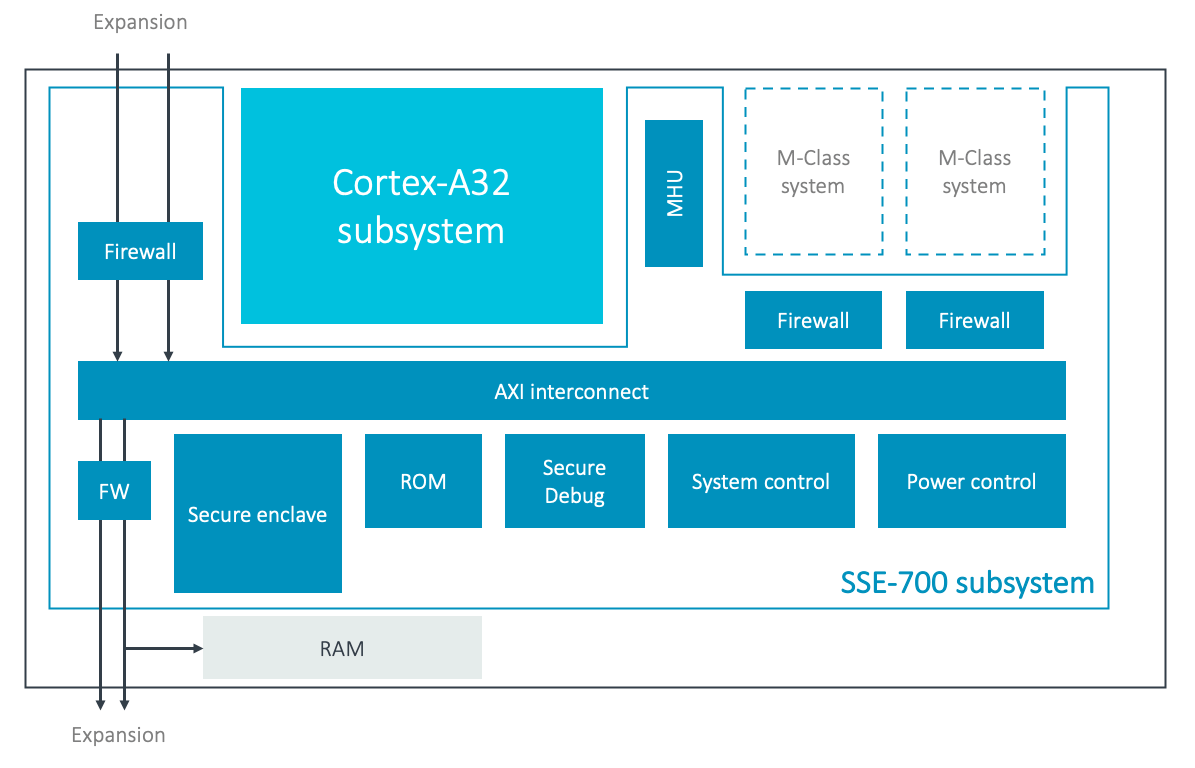 The Corstone-700 combines software and hardware components for Cortex-M based designs.
The components include:

Corstone SSE-700 subsystem
It contains SSE-700, a flexible compute subsystem designed to provide a secure solution for high-performance IoT – ideal for a range of Power, Performance, and Area (PPA) applications. It is powered by the Arm Cortex-A32 processor and includes up to two Cortex-M-based subsystems, providing a standardized programming interfaces for inter-processor communications. The configurable subsystem implements advanced built-in security features, and allows expansion with sensors, connectivity, video, audio, and machine learning on the device.

Corstone-700 Secure Enclave
The Secure Enclave provides Root of Trust (RoT) and cryptographic functions for the SSE-700 subsystem. It is based on a Cortex-M0+ processor core and associated peripherals, such as timers and watchdogs.

Corstone SSE-123 subsystem
The SSE-123 Example Subsystem included in Corstone-700 provides a secure design for the heart of your Cortex-M23 based system. Designed to be the lowest cost and power efficient implementation of an Arm TrustZone system, it is targeted at the constrained market segment. TrustZone offers an efficient, system-wide approach to security with hardware-enforced isolation built into the CPU.

Corstone SSE-200 subsystem
A TrustZone-enabled subsystem with the latest power-management technology, based on the Cortex-M33 processor.

Corstone SSE-050 subsystem
An efficient and expandable subsystem based on the Cortex-M3 processor.

CoreLink GFC-200
Similar to GFC-100, but the GFC-200 can have accesses from two masters. The two masters can operate in separate domains, such as a Non-secure domain and a Secure domain.

AHB Flash Cache
To get the most of Flash-based systems (either with embedded Flash or external Flash), an efficient cache system is necessary. Within a compact area, this block significantly improves performance and power consumption of your SoC.