Attribute buffers store the data for each vertex, allowing for the flexible storage of data that is based on a base pointer and row stride . Attribute buffer encoding is the method of how to pack multiple vertex attributes into your memory buffers.

There are two high-level strategies for attribute storage than an application can choose to use:

Non-interleaved storage stores each individual attribute in a unique array, with data fetches for a single vertex gathered from multiple arrays.

The image below shows you how attribute storage is handled in a non-interleaved buffer packing array:

The image below shows you how attribute storage is handled in an interleaved buffer packing array: 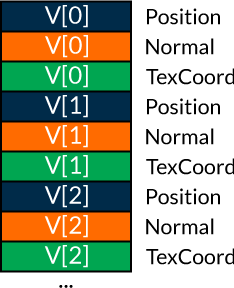 The Bifrost family of Mali GPUs comprises of the Mali-G30/50/70 series. These GPUs implement an optimized vertex processing flow that splits the vertex shader into two pieces: position shading and varying shading.

After primitive assembly, position shading is run, then primitives are put through the fixed-function clip and cull unit, before the varying shading fu nction is run for the vertices that contribute only to visible primitives.

The diagram below shows the vertex processing flow in an IDVS geometry pipeline:

And the corresponding vertex shader:

As data is always fetched from main memory as entire 64-byte cache lines, storing this using a single interleaved attribute data set in memory loads a total of 40 bytes per vertex. Even if only position and xyScale values are used, due to the vertex being culled.

Ideally, in this scenario, only 24 bytes per vertex needs to be loaded for culled vertices. This means that 40% of the read bandwidth is wasted.

To get the full benefit of split position and varying shading in Bifrost GPUs, we recommend using two interleaved data sets. The first data set should interleave all attributes required to compute gl_Position, and the second set should contain everything else.

Using two interleaved data sets in this way ensures that only position-related data is read from memory for culled vertices and maximizes the bandwidth savings. The two data sets can be stored as separate sub-regions inside a single buffer, or inside two separate buffers. This is shown in the image below: 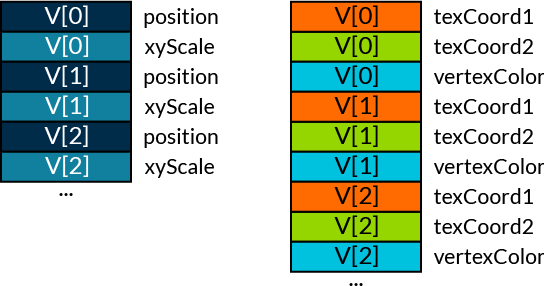 Note: While this type of split packing can small overhead costs on older Mali GPUs, impact is minimal if other best practices, such as ensuring good spatial locality, are also followed.

It is useful to produce specialized attribute data sets for each render pass for complex geometry that is reused in multiple render passes, such as a shadow pass and a color pass.

These specialized versions should strip out the unused attributes for each pass, producing a bandwidth optimized version of the mesh for each use.

Note: For most use cases, the split data sets for position and varying shading already provide optimal position-only data sets for depth shadow map generation. Meaning that further specializations may not be necessary.

Because all Mali GPUs are vector processors to some extent, the shader compiler can optimize memory accesses more effectively if it has guarantees that data is contiguous in memory.

In the previous example, the shader uploaded a pair of texture coordinates as two different vec2 attributes.

This means that at compile time the compiler has no guarantee that these are contiguous in memory because the application can change buffer packing at draw time. If this version of the shader is run though the offline compiler for a Mali-T880 GPU, the vertex shader requires 10 load/store cycles to complete and the load/store unit is the critical path.

If a pair of coordinates is uploaded together as a single vec4, the compiler is given some guarantees that they are contiguous in memory. This allows it to perform better optimizations:

This version of the shader should run more quickly and use less energy as it only requires 8 load/store cycles to complete.