There are a few more techniques and tricks that you can try to help optimize the performance of your game even further.

Use smoothing groups, or custom vertex normals, to define the hardness of an edge and alter the look of a model. Smoothing groups helps to create better shading when the art direction intentionally uses a tiny polygon count.

Take extra care, because smoothing groups affect the UV islands of a model, and also the quality of a normal map when you do baking. For more information, see the Real time 3D Art Best Practices Texturing.

If smoothing is implemented on a 3D model, the model must be exported from the 3D software and imported into the engine.

The following image shows an example of a wireframe of the rock cliff mesh that uses simple geometry and topology. The rock cliff looks much better with the material that has been applied. Therefore, any issues with the topology have disappeared: 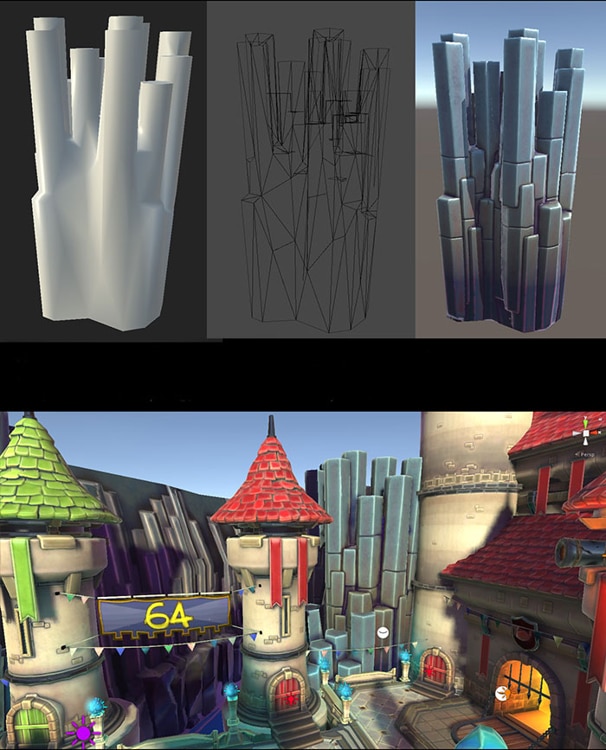 Shape exaggeration is a technique where certain parts and shapes are made bigger than normal to help with readability. When to use shape exaggeration depends on the type and style of the game that you are creating.

For example, a mobile device screen is small and it is sometimes hard to capture certain shapes when they are tiny. Exaggerating the shape helps to overcome this. If you make the hands on a character larger so that they are easier to see on a small screen, you will improve the experience of your users.

The following image shows how an exaggeration in the size of a hand could look. The hand, sword, and general body proportions are all emphasized in different ways, as you can see in the left side of the image. This was done to improve the visibility, while accounting for the lower polygon count that was used. The right side of the image shows how the final scene looks with the exaggerated character shapes: