Materials and shaders determine how 3D objects appear on-screen, so it is important to know what they do, and how to optimize them.

This guide covers multiple different material and shader optimizations that can help your games to run more efficiently and look better.

At the end of this guide, you can Check your knowledge. You will have learned:

Materials and shaders determine how your 3D objects look, so it is important to know what they do, and how they can be optimized.

A shader is a small program that tells the GPU how to draw an object on the screen. A shader tells the GPU every calculation that must happen to the object. A shader can only be used when it is attached to a material.

A material is something that can be applied to an object, or mesh, to define the visual look of that object. A material is used to set the specific value of parameters that are made available from a shader. Examples of these parameters include colors, textures, and number values.

The following screenshot shows an HLSL shader applied to a material in Unity: 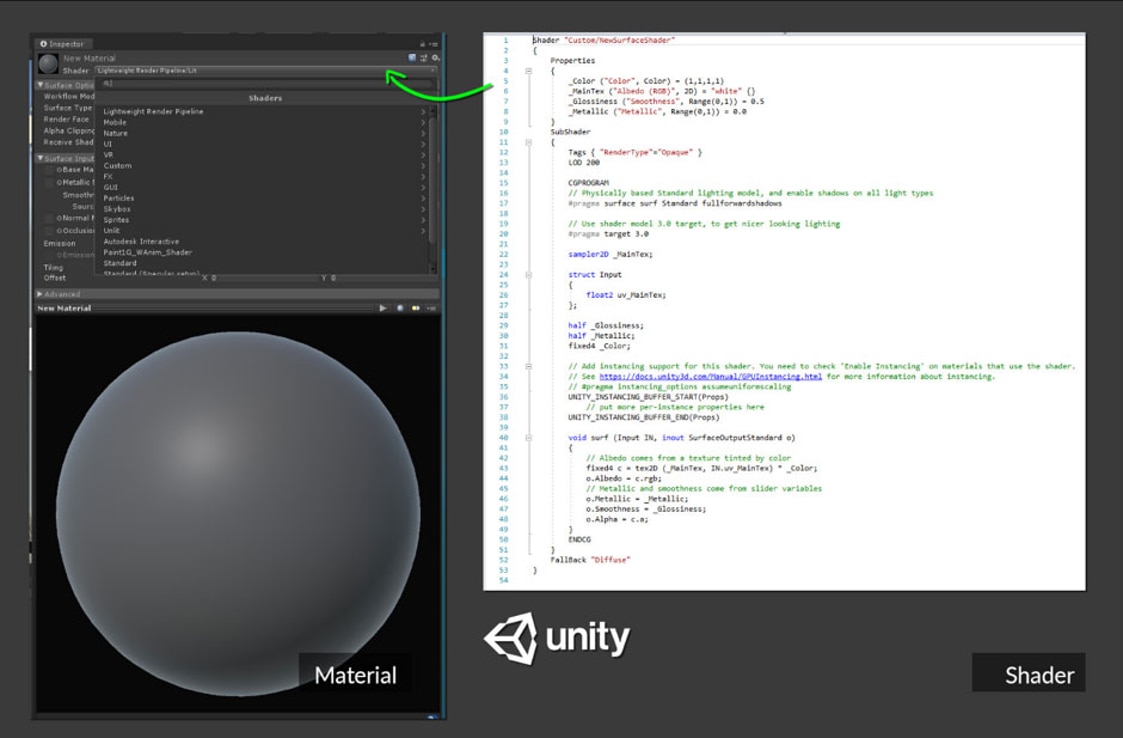 Unity also provides shader graphs, which let you build your shaders visually instead of hand-writing code. The following screenshot shows how you can build a shader graph by creating and connecting nodes in a graph network, then apply that shader graph to a material:

Use optimized shaders for mobile platforms

Unity provides a collection of shaders that are optimized for mobile platforms.

These shaders are located in the Mobile category within Unity.

The following screenshot shows where you can locate the mobile-dedicated shaders, in the Mobile menu: 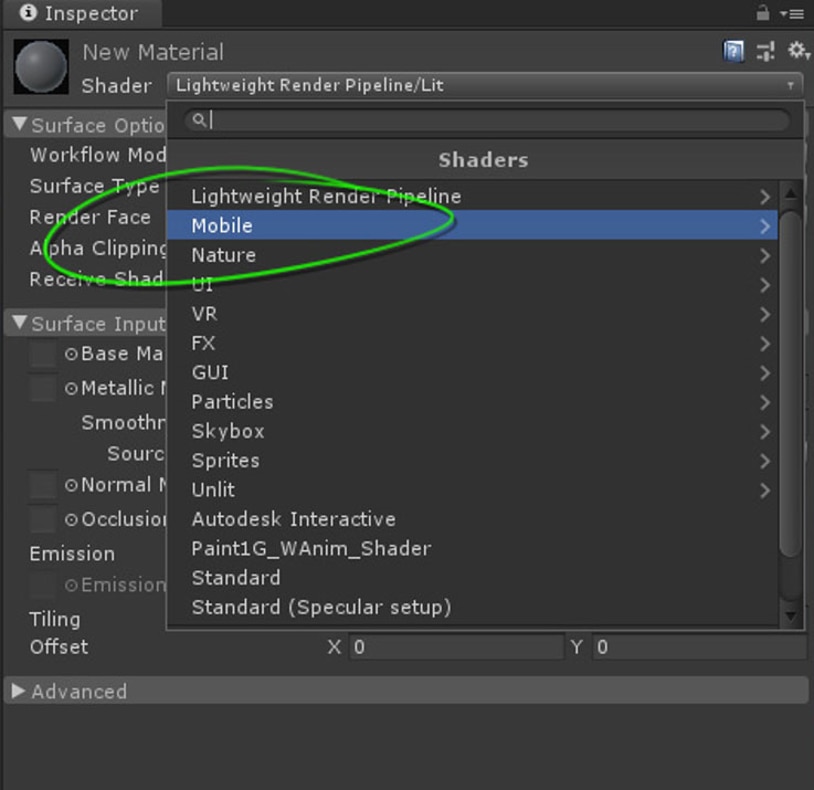 Only use features that are needed. Unity creates an optimized runtime shader version.  This version removes unused features from the shader that is chosen and configured in a material. This reduction in shader complexity helps with performance on mobile platforms.

Application size increases as more textures are saved in memory. Instead of using individual textures for the roughness texture and the metallic texture, you can pack these separate textures into the channels of a single texture. This technique is known as texture packing and it helps you to reduce the number of textures that are used.

The following image shows an example of how you can pack three separate textures into a single channel to save on bandwidth: Note: In Unity, a value must be added within the shader.

Using an unlit shader also reduces the number of textures that are used. This is because light does not affect the material. This means that the material does not need roughness or metallic textures.

When creating a shader, you can decide how the material reacts to light. Most shaders that are used in mobile games are classified as either lit or unlit.

Unlit shaders are the fastest and cheapest shading models. Use an unlit shader if you are targeting a lower-end device. Several key points to consider include:

The following image shows a comparison between a lit and an unlit object:

The same tower mesh and texture set have been applied, but are using different shaders. Lights do not affect unlit shaders, so they need less computation. This results in a better gaming performance, especially on less-powerful devices.

When the same pixel is drawn on-screen multiple times it is known as overdraw. Overdraw is a problem because the more layers of transparency that you have, the more expensive the rendering becomes. For mobile platforms, overdraw can severely affect performance.

The following screenshot shows how the blue lights could have had a transparency effect, but they still look good with an opaque material: When building levels, try to keep overdraw to a minimum. Unity lets you measure and visualize the amount of overdraw that is in a scene. This mode is highlighted in the following screenshot: 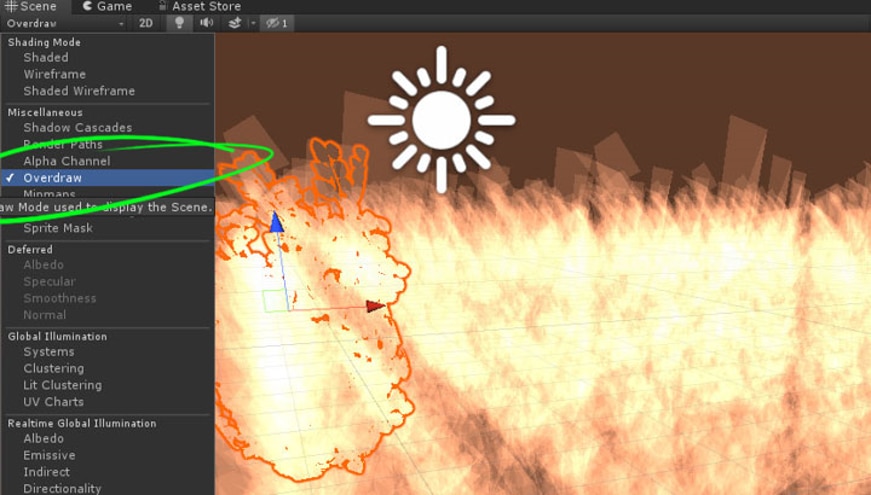 There are several different ways to implement transparency in a shader, each with their own benefits and drawbacks.

The most common used transparency implementations are alpha test and alpha blend:

Visually, alpha blend allows the material to have a range of transparency, making an object look partially transparent, instead of just opaque or completely transparent. Unity calls this blend mode transparent.

Deciding whether to use alpha blend or alpha test

The performance of alpha blend and alpha test depend on your use case. To determine which transparency implementation to use, Arm recommends that you always profile the performance difference between the two. On a mobile platform, you can use Arm Streamline to collect the performance data of a device.

If you want to use alpha test in your game, then here are some tips to remember:

If you want to use alpha blend in your game, here are some tips to remember:

In a static view of foliage, alpha blending can look better because of the soft edges. This is compared with the sharp cut in alpha test, as you can see in the following image: However, when in motion, the use of alpha blend looks wrong and the leaves do not render in the correct order. Alpha test handles the transparency, and the order of the leaves, much better. However, the edges are harsher, or aliased, when compared with alpha blend.

Usually, the alpha test visual quality is acceptable, because the aliased edges are not as obvious in motion. But the optical illusion is broken when the leaves and branches jump back and forward from the use of alpha blend.

In this section of the guide, we will describe some best practice tips. You can use these tips during the development of your game.

In a situation where overdraw is unavoidable, make the shader as simple as possible. Keep these principles in mind:

Adding more texture samplers, transparency, and other features makes a shader more complex and can affect the rendering. We recommend that you profile your shaders often.

Arm provides tools to perform profiling, for example Mali Offline Shader Compiler and Streamline. However, these tools require a higher level of graphics knowledge to understand more about how the GPU works. If you are editing shaders, then this is an area worth studying more deeply.

Do as many operations as possible in a vertex shader

It is common in projects to achieve a specific look through the combination of a vertex shader and a pixel, or fragment, shader. Vertex shaders work on every vertex, and pixel shaders run on every pixel.

Moving operations to a vertex shader usually means moving the processed data onto the pixel shader, through varying variables. So, even though moving operations to a vertex shader is generally a good idea, you must pay attention to the tiler in case it now becomes the limiting factor in performance. As usual, after working on optimizations, you must do further profiling.

You use mathematical operations within the shader to customize its look and behavior.

These math operations are not equal in terms of performance cost. Therefore, you must pay attention to their usage. Some of the more complicated operations include sin, pow, cos, divide, and noise.

Basic operations, like additions and multiplications, are faster to process, so try to keep the number of slower math operations as small as possible. You should minimize the amount of complicated math that you use must be kept lower on older devices, for example devices that use GLES 2.0.

To understand where the real bottlenecks are occurring in your application, profile the performance. Profiling is also recommended to compare the before and after effect of any optimization that you use.

This guide introduces concepts relating to different material and shader optimizations that can help your games to run more efficiently and look better.

You can continue learning about best practices for game artists and how to get the best out of your game on mobile by reading the other guides in our series: