While the project builds, we can look in more detail at how it works.

Convolutional networks are a type of deep neural network. These networks are designed to identify features in multidimensional vectors. The information in these vectors is contained in the relationships between groups of adjacent values.

These networks are usually used to analyze images. An image is a good example of the multidimensional vectors described previously, in which a group of adjacent pixels might represent a shape, a pattern, or a texture. During training, a convolutional network can identify these features and learn what they represent. The network can learn how simple image features, like lines or edges, fit together into more complex features, like an eye, or an ear. The network can also learn, how those features are combined to form an input image, like a photo of a human face. This means that a convolutional network can learn to distinguish between different classes of input image, for example a photo of a person and a photo of a dog.

To generate this spectrogram, we use an interesting technique that is described in the next section.

In our code, each spectrogram is represented as a 2D array, with 43 columns and 49 rows. Each row represents a 30ms sample of audio that is split into 43 frequency buckets.

To create each row, we run a 30ms slice of audio input through a Fast Fourier transform. Fast Fourier transform analyzes the frequency distribution of audio in the sample and creates an array of 256 frequency buckets, each with a value from 0 to 255. These buckets are averaged together into groups of 6, leaving us with 43 buckets. The code in the file micro_features/micro_features_generator.cc performs this action.

To build the entire 2D array, we combine the results of running the Fast Fourier transform on 49 consecutive 30ms slices of audio, with each slice overlapping the last by 10ms. The following diagram should make this clearer: 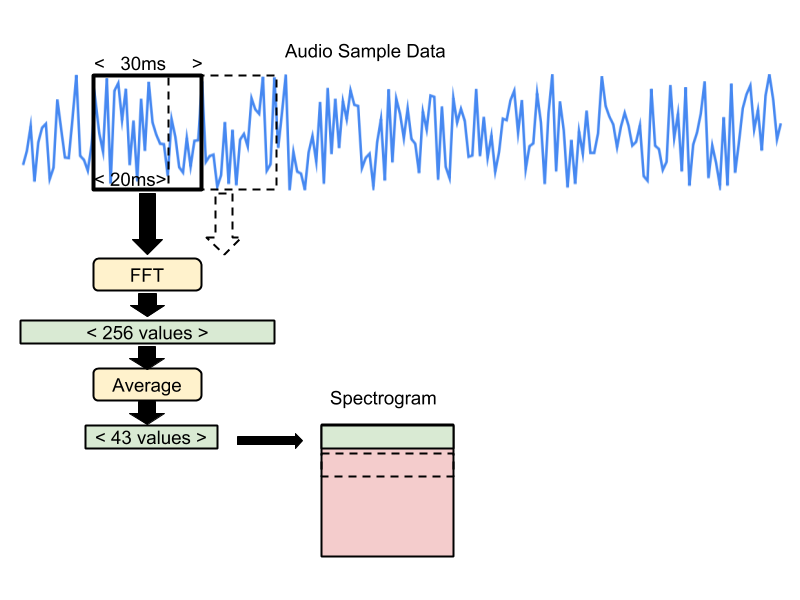 You can see how the 30ms sample window moves forward by 20ms each time until it has covered the full one-second sample. The resulting spectrogram is passed into the convolutional model.

The process of capturing one second of audio and converting it into a spectrogram leaves us with something that our ML model can interpret. The model outputs a probability score for each category it understands (yes, no, unknown, and silence). The probability score indicates whether the audio is likely to belong to that category.

The model was trained on one-second samples of audio. In the training data, the word “yes” or “no” is spoken at the start of the sample, and the entire word is contained within that one-second. However, when this code is running, there is no guarantee that a user will begin speaking at the very beginning of our one-second sample.

If the user starts saying “yes” at the end of the sample instead of the beginning, the model might not be able to understand the word. This is because the model uses the position of the features within the sample to help predict which word was spoken.

To solve this problem, our code runs inference as often as it can, depending on the speed of the device, and averages all results within a rolling 1000ms window. The code in the file recognize_commands.cc performs this action. When the average for a given category in a set of predictions goes above the threshold, as defined in recognize_commands.h, we can assume a valid result.

The RespondToCommand method in command_responder.cc is called when a command has been recognized. Currently, this results in a line being printed to the serial port. Later in this guide, we modify the code to display the result on the screen.

The arguments passed to RespondToCommand contain interesting information about the recognition result. For example, score contains a number that indicates the probability that the result is correct. You might want to modify the code so that the display varies based on this information.