Did you know that you can train AI on your Raspberry Pi without any extra hardware or accelerators? In this guide, we use TensorFlow to train a Raspberry Pi to burst into applause whenever you raise your hands in the air using nothing more than a camera and the on-board Arm CPU of the Pi. This activity even works on the Pi Zero.

This guide assumes you have:

This video introduction shows what you can achieve:

The next step is to install the libraries and download the scripts that are needed to train a neural network.

For a Raspbian base install, the only dependency that you need to add is TensorFlow.

If the TensorFlow installation is not verified, follow the guidance at Install TensorFlow with pip page for Raspberry Pi with Python 3 as some of the requirements may have been updated.

We estimate that the installation will take 30-60 minutes.

Download or clone our ML examples repository from GitHub.

Navigate to the yeah-world directory by entering the following commands:

There is nothing special about these scripts, they are easy to understand and modify. Feel free to explore and hack them with your own changes.

The Python source code is easy to follow and is split across these three files:

Train the AI with your own data

Teaching a neural network to reliably recognize gestures from every human at every location and in every light condition presents a huge challenge. Meeting that challenge requires lots of varied examples and careful training. However, teaching a network to recognize your gestures in your environment is easy.

In fact, training your neural network in this way is so easy that we can do it right now on the Raspberry Pi itself. We can do this training with no GPU or accelerator to help with the required processing.

The training process has three steps:

Set up your camera and environment

Neural networks can learn to detect and generalize small gestural changes that only affect a few dozen pixels on the screen, but it takes much more data and training time than we want to spend.

To make it easier for the neural network to learn from limited data, place the camera so that:

A good rule is to place the camera in front of you so that your hands can reach the edges of the frame when you stretch your hands out in front of you. To preview what the record and run scripts will see, use the preview.py script with this command:

The setup in this example preview is acceptable: 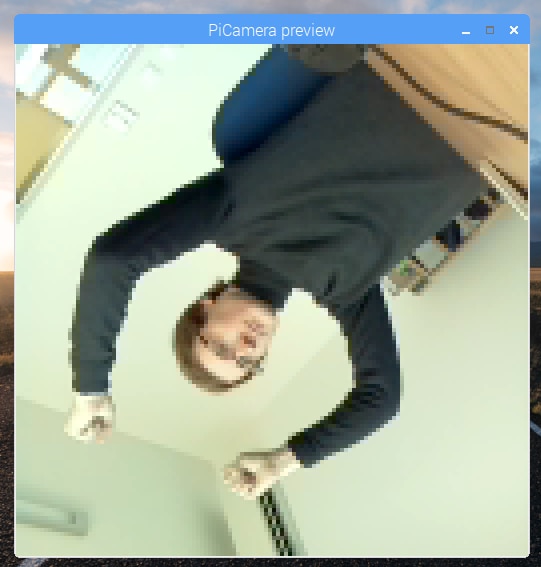 It does not matter if the camera is the correct way up as long as its position remains consistent. For best results, ensure that:

When you are happy with the positioning of the camera and the lighting, either close the preview window or press ctrl-c at the console to exit the preview app.

Ideally, the AI learns that the principal difference between the two sets of pictures is the position of your hands. However, the AI might learn to recognize other things, for example:

To help you get good results, here are some tips:

The most important thing is to be consistent. If you are teaching the network to detect your hands in the air, keep them up there in every frame of the hands in the air recording. Vary the position and angle of your hands, but do not lower them all the way down and then put them up again. If you do, you will include frames that look just like the hands down frames. This means that the network will assume that the difference is, for example, how your clothing is folded or how lights reflect off your glasses.

If you are using a Raspberry Pi Zero, or SSH or VNC, the live preview window can drop the frame rate during recording below 30fps. This means that less data is collected, which is a bad thing. To ensure recording is as close as possible to 30fps, run the following command in the terminal before entering further commands:

If you keep the preview window open during training, notice that the lighting and color balance fluctuates rapidly. This fluctuation is intentional because the camera exposure and white balance are set randomly for each frame during training. This technique, which is a variant of domain randomization, shows lots of variances in something that might otherwise trick or confuse the AI: in this case, lighting and color balance. It is more common to artificially add this variance to the data at training time, but this is beyond the scope of this guide.

After you have followed these steps, you will have three files of similar size that contain the three categories of gesture data that you recorded. To view the files, run the command:

The three files are:

Train a network on the data

Running the train.py script will load your data files into memory and train a neural network to distinguish between them. There is good support in Keras and TensorFlow for training from disk without loading every example into RAM, but this script is a quick and easy way to get started. To run the script, enter the following command:

The first argument is the name of the model file to save the neural network to, which is model.h5. You then list the different behavior video files that you have recorded. It is important that the first file is the file that contains your cheering gesture. All of the others are gestures the network should learn to ignore.

What is going on in this process?

The script takes the training files in turn and loads all the frames from each file, which means that you need sufficient RAM to hold all the files. When the images are loaded, they are passed through a neural network, called MobileNet, that has been pre-trained on the ImageNet dataset.

MobileNet has already learned how to extract useful features, like edges, texture, and shapes from images. This step is the slowest part of training. If we were artificially adding noise and variation to the images, which is called domain randomization, this step would be even slower and longer. We are taking a short cut in this guide and skipping this step.

Having converted every frame into an array of features, these features are used to train a small classifier network that learns to predict the class (in this case the 0-based input file index) it came from.

Each epoch is one cycle through every frame. To prevent it latching on to overly specific things about individual frames, you add some random noise to the features. Adding noise may prevent the neural network from reaching 100% accuracy during training but makes the neural network more accurate when run on previously unseen images.

MobileNet was introduced by Google in 2017. It is a convolutional neural network that has been optimized for size and speed at the expense of accuracy. MobileNet is trained on the well-known ImageNet dataset, in which one million images are split into 1000 different classes. In this guide, we have removed the final layer that classifies images into 1000 categories removed from MobileNet. Instead, the train.py script uses Keras to build a new layer that classifies images into the number of categories that are passed to train.py.

If you read the code in the train.py file, you will notice that the classifier model is simple. The data is only augmented with gaussian noise instead of rotations, transforms, and occlusions. The learning rates and batch size are left at Keras defaults. A validation split with early stopping is not used. Domain randomization is applied to the data at source, and is not varied across epochs during training. This example is deliberately clean and sparse to keep it easy to understand and quick to train even on a Pi Zero. This means that you can experiment to improve your results.

Now you can run a neural network that is trained on your environment with a single command:

Wave your hands in the air. Does it cheer? Even if your audio is not configured, the console prints the class predicted and display either:

You can do a lot more than cheer. You can replace the files in the folder named sounds, and train a model to recognize different gestures, objects, or situations. For example, you can teach a Pi to:

With a little python programming, you can also make your Pi do more interesting things in response to camera input, like setting GPIO pins, and sending alerts and emails. The applications are limited only by your imagination.

This guide is the first in a series of guides about training your own gesture recognition on the Raspberry Pi using machine learning. There are some limitations to this approach:

You can easily extend the example code by modifying the classifier network, and by changing the actions that are performed when each category is detected. If you are already familiar with neural networks, we recommend that you add data augmentation techniques and explore different feature extraction networks like larger MobileNets and the Inception family.

We also explore these topics in the Teach your Raspberry Pi, Episode 2: multi-gesture recognition guide.