This tutorial details how to use the Performance Monitoring Unit (PMU) and the Event Counters in Arm DS-5 Development Studio. They can provide valuable information regarding system events, that could prove useful when assessing the performance and resource efficiency of your system. By the end of this tutorial you should be able to implement event counters in your code and interpret their results.

Using the PMU and the Event Counters in DS-5

This tutorial details how to use the Performance Monitoring Unit (PMU) and the Event Counters in Arm DS-5 Development Studio. They can provide valuable information regarding system events, that could prove useful when assessing the performance and resource efficiency of your system. By the end of this tutorial you should be able to implement event counters in your code and interpret their results.

The PMU architecture uses event numbers to identify events. These numbers are used to configure the counters so that each one only monitors a single event at a time. The PMU and event counters are part of the Performance Monitors Extension, making them optional features for Armv7-A/Armv7-R/Armv8-A implementations. With this in mind, you should check the Technical Reference Manual for your processor before continuing.

There are a number of advantages to using event counters; they provide highly accurate information and are a non-invasive debug feature with minimal impact on performance.

There are several situations where the developer might benefit from the use of event counters. Here are some examples:

Availability of counters on different implementations

The PMU architecture and events

While the PMU architecture defines a set of common events, each implementation can also define its own specific events. It is therefore essential that you consult your implementation's Technical Reference Manual.

The counters are configured using the event numbers defined by the PMU architecture and specific implementation, and can each monitor any of the available events. It is important to note that there is an additional cycle counter that is not configurable and can only monitor cycles.

DS-5 and event counters are a powerful combination, allowing you to step through code, set breakpoints, and access the value of any counter when the target is stopped. Using these tools together you can monitor events for any particular section of code, aiding in the optimization process by detecting potential inefficiencies. 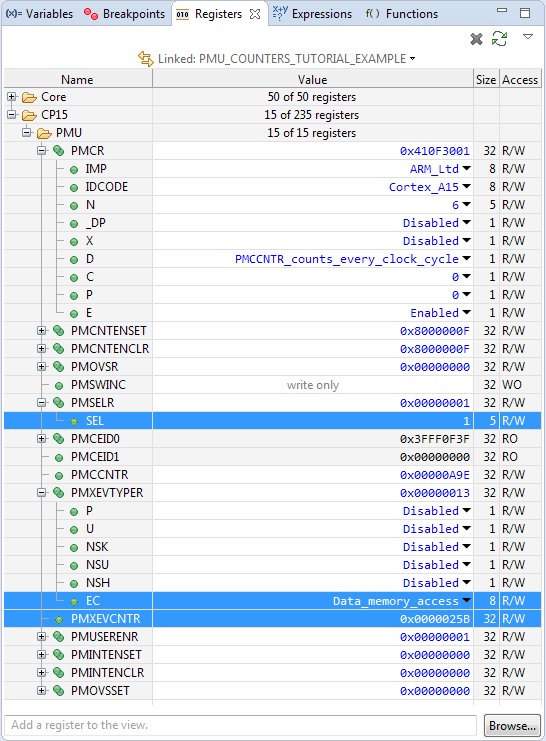 It should also be noted that halting the processor and entering debug mode is an invasive process that can affect the counter values. It is therefore recommended that you do not halt the processor if high precision is required.

Setting up and using the event counters

This section outlines the steps required to setup and use the event counters on a Cortex-A15 (Armv7-A). The steps for Armv8-A processors are similar, though may be subject to small variations.

You can choose not to activate the cycle counter (steps marked as optional). This will not affect the event counters since they are independent from the cycle counter. If you do not need a readout of the number of cycles, then you can leave the counter off, which will reduce the performance impact of the PMU on your system.

The counters are now configured and will monitor events of interest as execution continues.

Source code performing this operation can be found in this downloadable project that you can import to DS-5. Please import this as you will need it for the next part of this tutorial.

Note: This example is written for the Cortex-A15 (Armv7-A), and runs on a CoreTile Express A15x2-A7x3 (TC2) on the Versatile Express platform. Arm DS-5 Development Studio 5.21.1 was used for testing.

This example demonstrates setting up the event counters as described above. The counters will be used to measure the performance of a particular section of code, allowing for a comparison between its performance both before and after optimization.

This program creates and populates two matrices, adds them together, then stores the result to a third matrix. The addition can be performed in two different ways:

In theory the second approach should be more efficient, the counters can be used to prove this. 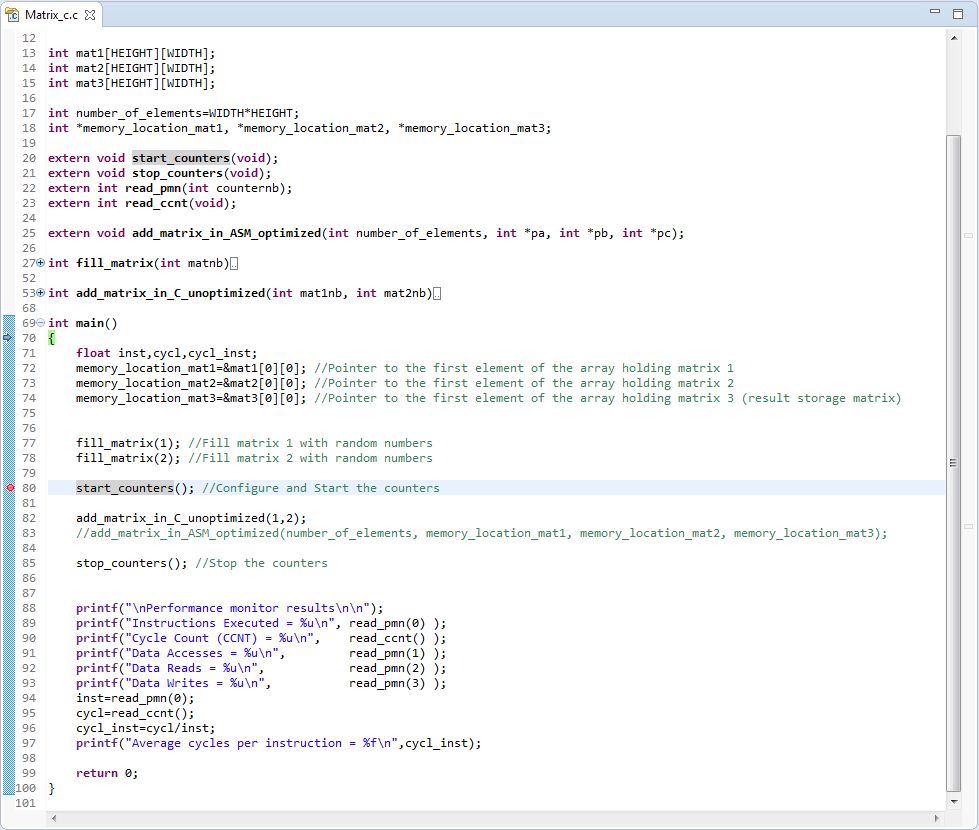 We can observe that the optimized version requires six times less data accesses to process the same amount of data, and processes that data in half the cycles.

This tutorial has introduced the concept of event counters in Armv7-A, Armv7-R and Armv8-A, and how they can be used in conjunction with DS-5 in order to monitor certain aspects of system performance. The tutorial outlines the steps required to configure these timers, and a real-world example has been used to show how they can be useful when optimizing and testing code.

A detailed list of the common PMU events and their explanations can be found in the Architecture Reference Manual.

In this example vectorization was performed manually through the use of NEON instructions in Arm assembler, but it can be performed automatically using compiler options such as the Arm Compiler's --vectorize option, further information can be found in your compiler's documentation.