Linux is a popular operating system in embedded products, and as a result is experiencing increased usage for system design and verification. The Linux Device Tree has made it significantly easier for those who work with simulated hardware, and often partial systems, to be able to run Linux with nearly no changes to the kernel source code. The following article describes how to embrace these features and get Linux running on a minimal system using the Arm Cortex-A15 processor.

To begin, the initial hardware needed to run Linux on an Arm Cortex-A15 processor must be identified. This should include the core, memory, and a UART. Use the latest kernel from kernel.org and change as little of the Linux source code as possible, as this makes it easier to update to new versions of Linux as they are released.

Simulation speed is more important than hardware accuracy when experimenting with Linux configurations to confirm a working kernel. This is an ideal situation in which to generate a Fast Model design using the SoC Designer canvas. After the kernel is working with the Fast Model design, it is easy to run the cycle accurate simulator, sdsim, for benchmarking and utilize Swap & Play to confirm a fully working virtual prototype that is both fast and accurate.

The hardware design, referred to as 'A15mini' (indicating a Cortex-A15 system with minimal hardware), requires specifying the memory map and interrupt connections. The memory for the Cortex-A series Versatile Express is from 0x80000000 to 0xffffffff. The first PL011 UART is located at 0x1c090000 and uses interrupt 5 on the Cortex-A15 IRQS[n:0] input request lines connected to the internal Generic Interrupt Controller (GIC). The Cortex-A15 needs to have the base address for the internal memory mapped peripherals (PERIPHBASE) set to 0x2c000000. It should be noted that the UART runs from a 24 MHz reference clock.

Creating the A15mini with SoC Designer requires instantiating the models and connecting them on the canvas using sdcanvas. Using cycle accurate models means more detail is needed to create the design. In addition to the CPU, simple address decoder, and memory, use the Arm CCI-400 Cache Coherent Interconnect and the NIC-301 interconnect. These models, along with the Cortex-A15 are built using Arm IP Exchange, the web-based portal that builds models directly from Arm RTL code. To use the system just answer a few questions or submit an XML file from AMBA Designer to retrieve a simple to use model in the form of a .so file.

The design is shown below: 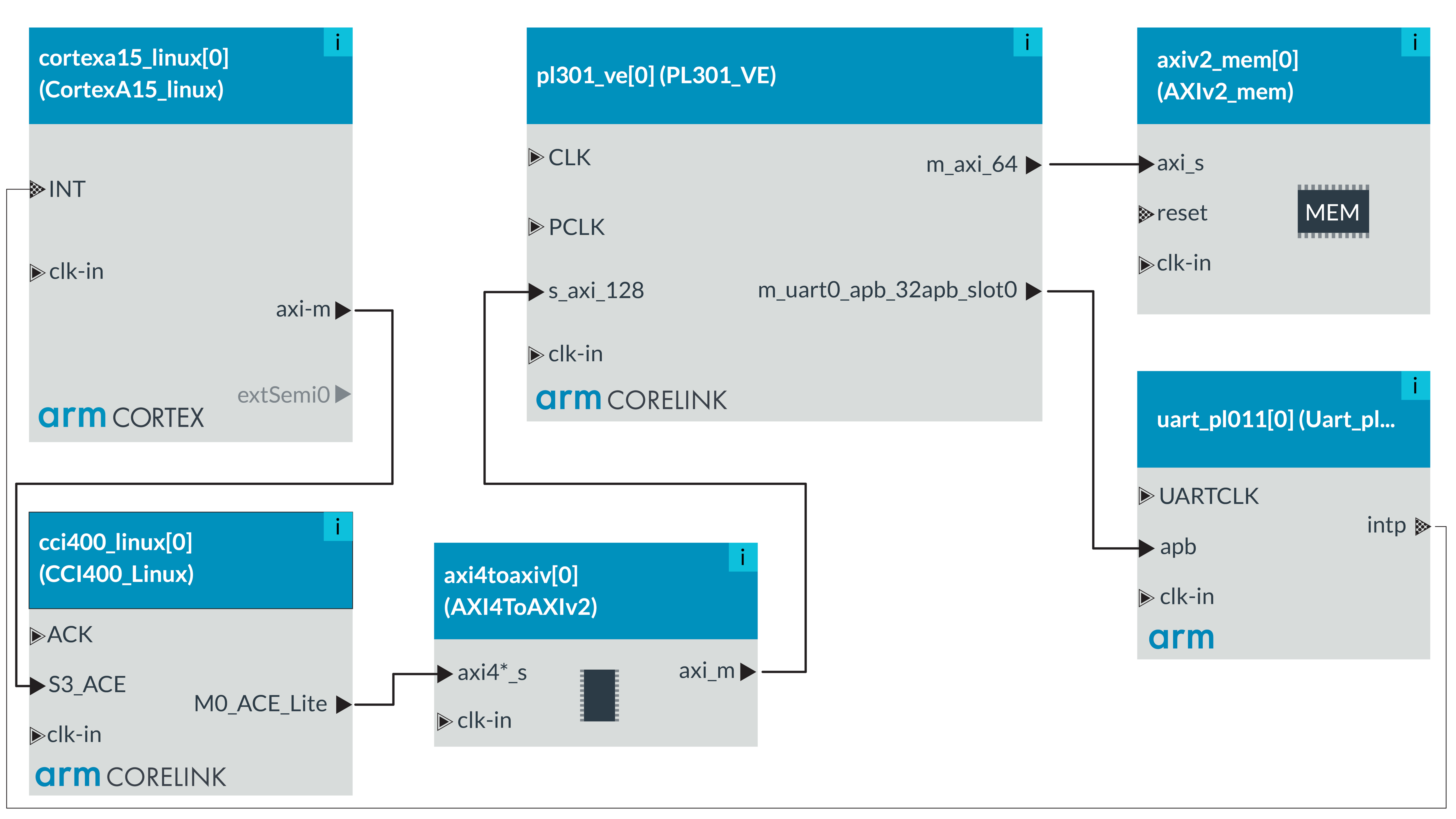 To create a Linux image for the A15mini, the following items are needed:

For the most efficient method, use a single executable file (ELF) containing the items above. Note that the file must be regenerated when any of the items changes.

Download the latest Linux from kernel.org and begin configuration. The default configuration for the Versatile Express is found in the Linux source tree at: arch/arm/configs/vexpress_defconfig

Use the Versatile Express configuration as the baseline by running:

In this example the file new-buildroot-rootfs.cpio.gz has been copied from the Cortex-A9 Linux CPAK and renamed to fs.cpio.gz, however you may prefer using an alternative file system.

To create the single executable file with all of the needed artifacts, embed the file system image in the kernel, and append the Device Tree Blob at the end of the kernel image.

To embed the file system image in the kernel, you can use any of the Linux configuration interfaces, e.g. menuconfig:

Navigate to the General Setup menu (see the image below), scroll down to “Initramfs sources file(s)” and add the name of the file system image, fs.cpio.gz. 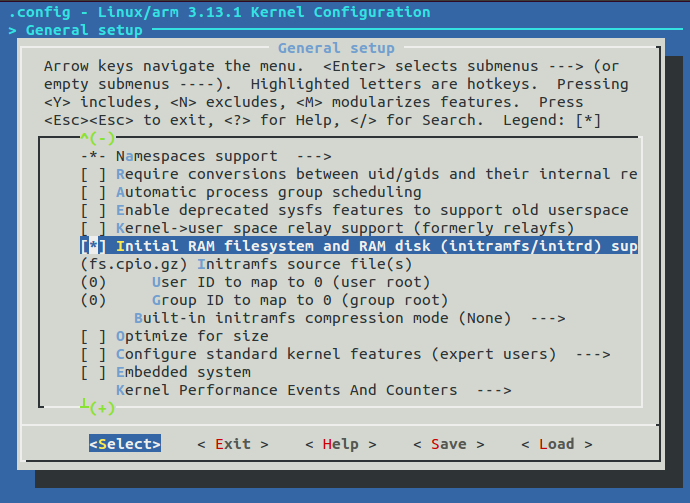 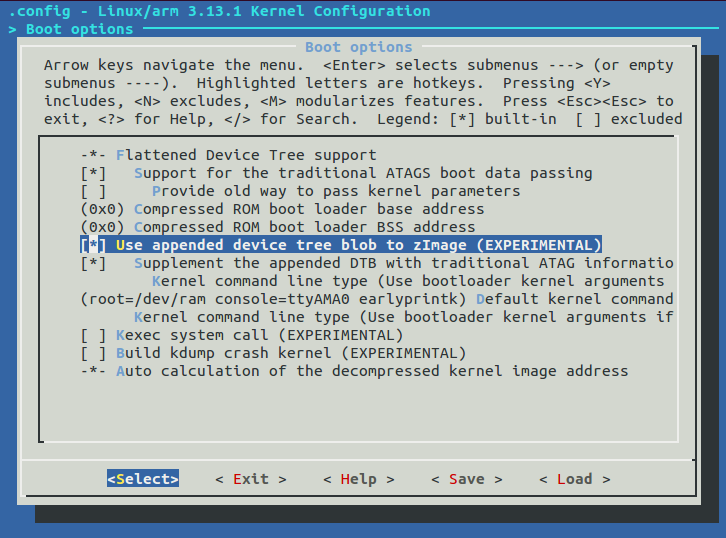 In the Boot options menu set the Default kernel command string by adding root=/dev/ram and earlyprintk, as this specifies to use a ram based root file system.

To run the 3.13.1 kernel on the A15mini, edit the file arch/arm/mach-vexpress/v2m.c to remove the line that configures the kernel scheduler clock to read a time value from the Versatile Express System Registers (this peripheral has a register which provides a time value).

The line removed is in the function v2m_dt_init_early() and is line number 423, the call to versatile_sched_clock_init(). 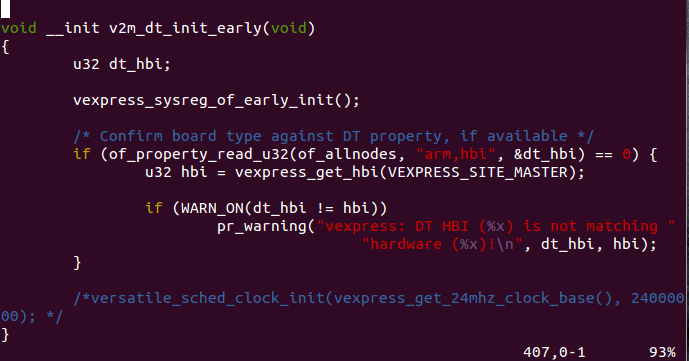 Now the source tree can be compiled. In this example using Ubuntu 13.10 and the cross-compiler with the GNU prefix arm-linux-gnueabi, the compile command is:

The most important compilation result is the kernel image file arch/arm/boot/zImage.

The Versatile Express device trees for Fast Models are available from linux-arm.org. The easiest way to get the files is to use git:

The file that is the closest match for the A15mini in the fast_models/ directory rtsm_ve-cortex_a15x1.dts

This file also includes a .dtsi file named rtsm_ve-motherboard.dtsi. To support the A15mini hardware system the two device tree files must be modified so they match the hardware available by removing all of the hardware that doesn’t exist.

Edit rtsm_ve-motherboard.dtsi t1 to remove all of the peripherals that are gone from the A15mini such as flash, Ethernet, keyboard/mouse controller, three extra UARTs, watch dog timer, and more.

Linux requires a timer to run, however using the internal timer in the Cortex-A15, sometimes called the Architected timer, enables the hardware design to be kept as small as possible. This can be achieved by removing the SP804 timers in the Versatile Express and the System Register block that provides the time value for the scheduler clock.

Support for the Arm Architected timer is present in rtsm_ve-cortex_a15x1.dts, however the clock-frequency must be added to the timer in the file.

Here is the timer entry with the clock-frequency added:

To use the feature that appends the device tree to the Linux kernel image, copy the zImage from the kernel tree:

Then concatenate the device tree blob to the end of the kernel image:

To create a single, all-inclusive executable file, a small assembly boot loader is preferable. An example of this is available in the Arm Fast Models ThirdParty IP package. This is an add-on to Arm Fast Models which contains all of the open source software that can be run on Fast Models examples. The majority of the package is the Linux source trees and file system images for different examples.

Two useful files from the RTSM_Linux source code that come with the ThirdParty IP package include:

The addition of these two files, combined with the modified zImage (including embedded file system and concatenated device tree) means that everything is now present in the single executable file.

You may prefer to make minor adjustments to the Makefile, inserting your paths, compiler name, and file names to generate the file A15-linux.axf as the final output that will be used in simulation.

The updated Makefile is shown below: 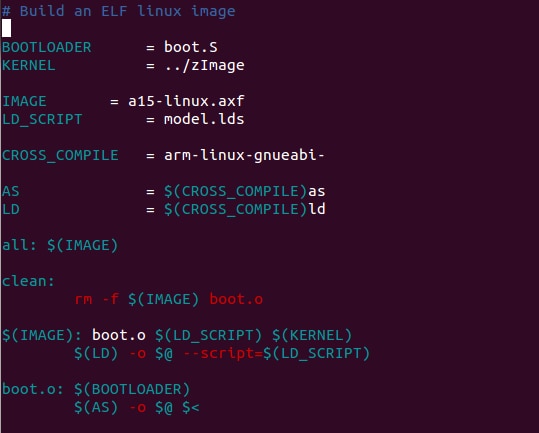 There are two ways to confirm the design is correct:

Both methods are recommended to make sure the design is functioning properly and there are no errors in connecting the interrupt, setting CPU model parameters, or other common mistakes made during design construction. One of the most common mistakes is forgetting to set the PERIPHBASE address of the A15 to 0x2c000000. 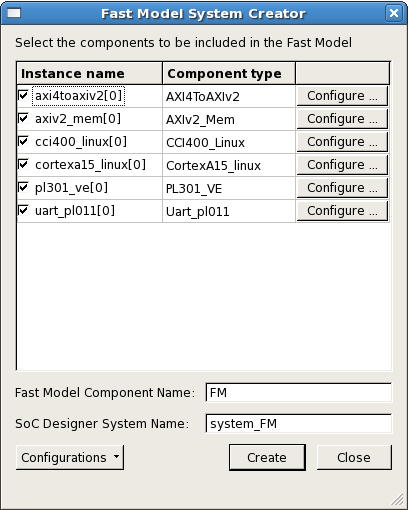 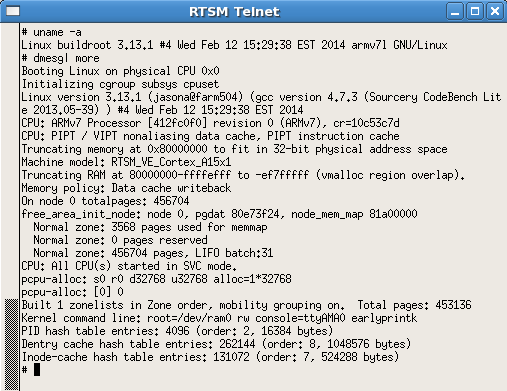 Working with Linux on a cycle accurate simulation is a great way to study all of the details of the hardware, software combination such as bus utilization, cache metrics, cache snooping, barrier transactions, and much more. However Linux takes about 300M instructions to boot and well over a billion clock cycles. 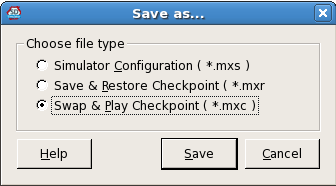 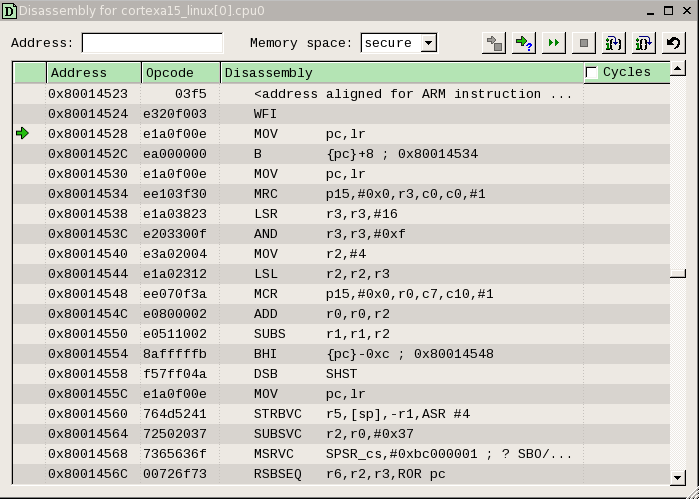 A debugger such as RealView or DS-5 can also be connected to start source level debugging.

Alternatively use the addr2line utility to find out where in the code the Disassembly or Register Window is showing. This is useful to take a peek at the current location without starting the full debugger. For the disassembly window above use:

This allows you to see the source code for the current location as a quick check. Here is the code:

Swap & Play can be used to load checkpoints and do cycle accurate debugging as well as performance analysis for benchmarks. Cycle Model users typically run benchmarks such as Dhrystone, CoreMark, and LMbench as Linux applications.

The example shown here for porting Linux and setting up a system which can be used with Swap & Play uses a CPAK on Arm IP Exchange. You can use this system to port your own version of Linux or customize the hardware configuration to match that of your own design.

This article was originally written as a blog by Jason Andrews. Read the original post on Connected Community.