Accelerated development, from bootloader to optimization

Despite the broad set of requirements across the different segments, some of the key challenges in software development are common. See below how DS-5 Development Studio and its ecosystem can help you take your product to market ahead of the competition.

Board bring-up and bootloader development are critical stages of a project as they can delay the start of the OS porting. DS-5 bare-metal debugging capabilities such as ETM/PTM execution trace and vector catch help you get your board up and running, reducing the risk of unexpected delays. Its powerful Jython scripting also reduces the complexity of debugging modular code bases such as the Unified Extensible Firmware Interface (UEFI). Learn more about DS-5 support for UEFI.

Porting the OS onto your hardware and developing all required modules and device drivers usually takes up a considerable amount of resources. But this is also when systems can turn into great, optimized ones or unreliable, kernel-crash generators. Having the right tools is essential to ensure software correctness and stability. The DS-5 Debugger has built-in awareness of Linux kernel data structures, which allow you to have full visibility into kernel and user space threads and dynamically loaded modules. 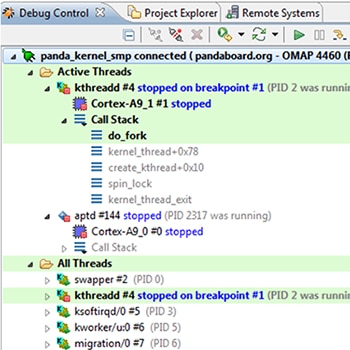 Differently from other tools, the benefits of using DS-5 Development Studio don't stop at kernel level. In addition to supporting standard GDB protocol connections to gdbserver to both Linux or Android NDK-created native applications. It also ships a proprietary drop-in replacement for gdbserver that uniquely enables you to run and step through your application backwards, until you find the root cause of the bug.

DS-5 Streamline is another tool that makes the DS-5 Development Studio stand out from other commercial and open source tools for application development and optimization. With intuitive interface and comprehensive data encompassing software profiling, multicore-enabled CPU and GPU performance metrics and more, Streamline is now the industry standard tools for system analysis on Arm. Learn more about DS-5 Streamline.

The number of energy-constrained market applications for Linux and Android seems to be growing by the minute. From battery operated devices such as mobile phones and wearables, to energy hungry data centers and telecommunications equipment, every new generation of product has to push energy efficiency boundaries to the next level. DS-5 Streamline enables system and software developers to visualize how efficiently software utilizes systems resources to save energy or reduce power. Learn more about DS-5 Streamline.

Develop ahead of hardware availability

Virtual platforms are a cost-effective, scalable way to start porting boot code and kernel, and develop applications without a hardware target. Arm has available several Fixed Virtual Platforms (FVP), including for its latest processor technologies such as big.LITTLE and Cortex-A50 series. DS-5 Professional can be used for development on any Armv7 virtual platform, including of course the quad-core Cortex-A9 FVP that ships with it for you to start developing software from day zero. DS-5 Ultimate Edition includes the Armv8 FVP, enabling development for 64-bit systems.